TOKYO - Japanese police investigating the discovery of a woman's severed head have reportedly uncovered several other body parts in different locations, acting on information from an American in custody over her disappearance.

Authorities found a torso and two arms in the mountains near the western city of Osaka and two legs in Japan's ancient capital of Kyoto, some 50km away, according to local media.

Police on Saturday found the head of the unidentified woman inside a suitcase left in a room in Osaka which was rented by the American.

Police have formally arrested the 26-year-old and he has confessed to "abandoning the woman's body", according to national broadcaster NHK. 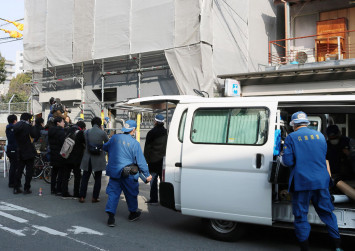 The woman was last seen in mid-February walking into a building in Osaka with the man. Before she disappeared, she told friends she was visiting a man she had met online.

Surveillance camera footage showed her entering the building with him but never leaving, local media said.

The man was seen going in and out of the complex alone several times between Feb 16-18 and carrying a large bag, according to Kansai Telecasting, a local TV station.

Police declined to comment to AFP on the reports or the case itself, which follows the discovery just outside Tokyo last Halloween of nine dismembered bodies stashed in coolers and tool boxes.