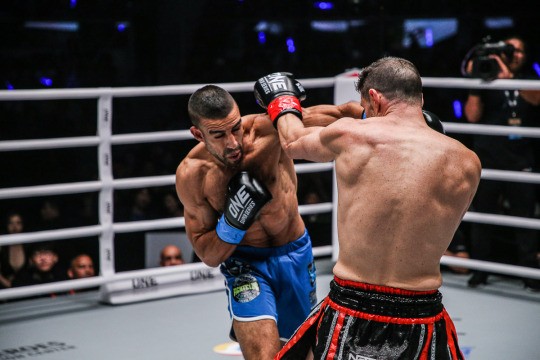 In a thrilling ONE Super Series Kickboxing catch weight encounter, Mustapha “Dynamite” Haida was able to blast his way through Daniel “The Rock” Dawson, picking up an impressive victory in his promotional debut.

Af 2:14 of the third round, Haida planted a ferocious left hook on his Australian opponent to pick up the knockout victory at ONE: BEYOND THE HORIZON in Shanghai, China on Saturday, 8 September.

Striking legend Dawson brought his mixed bag of skills to the table in the first round, showcasing the punches and kicks that have earned him world titles in Muay Thai, kickboxing and boxing.

The 40-year-old was in good form, until he was caught with a high kick from Haida, which clipped his chin and dropped him to the canvas.

“The Rock” lived up to his moniker to survive a difficult end to the first round inside the Baoshan Arena, and returned to the front foot in round two.

Again, he mixed up his boxing with kicks and sweeps, looking sharp with his punching combinations. Haida’s straight left caused him some problems, but Dawson rallied late on and had his man on wobbly legs before the bell rang.

With a deficit still to make up from the first round knockdown, the Australian needed a dominant display in the third round, and he looked to land his left hook and front kicks.

However, Haida kept his guard tight and dodged strikes by using good head movement, before unleashing a powerful knee to the body that hurt Dawson.

With his foe reeling, the Italian had a clear route to the chin and planted a hard left hand on his target, ending the contest in style before the judges were allowed to have their say.

His power was the big difference on the night, and his impressive stoppage improved his record to 54-10-3.