A handout photo. Volunteers carry a Covid-19 patient lying on a hospital bed during a flood in Myawaddy, Myanmar, on July 26, 2021.

"Hundreds of houses are submerged in water and only their roofs can be seen," Pyae Sone, a social worker in the Kayin State town of Hlaingbwe told Reuters by telephone, adding that the water had begun rising early on Monday.

"Covid-19 is spreading in the town. There are so many people who have lost their sense of smell and many who are sick, it's not clear if it's Covid-19 or seasonal flu. But now people can't stay at home or gather in shelters, so the spread could be serious."

About 500 residential areas along the Thai border were affected, displacing hundreds of people, the group said.

Bo Bo Win, the head of a charity in the town of Mawlamyine, 120 km away, said at least another 500 people there had also suffered in the annual floods.

Read Also
As Myanmar battles Covid-19 surge, calls arise for urgent aid that is not co-opted by junta 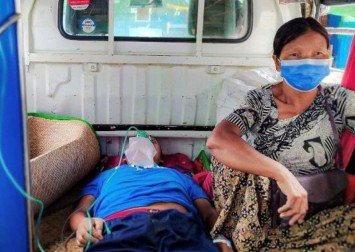 "This year's flood is not as bad as the one we experienced in 2019, but we are in the middle of a pandemic," Bo Bo Win added.

Infections in Myanmar have surged since June, with 4,630 cases and 396 deaths reported on Monday.

Medics and funeral services put the toll far higher, in an outbreak also linked to scores of new cases in China's border province of Yunnan.

The military has struggled to keep control since taking power in a February coup that triggered nationwide protests, strikes and fighting on multiple fronts in border regions as civilians take up arms against the junta.