Soldiers cross a street as people gather to protest against the military coup, in Yangon, Myanmar, on Feb 15, 2021.

YANGON - Myanmar security forces killed at least 25 people on Friday (July 2) in a confrontation with opponents of the military junta at a town in the centre of the South-east Asian nation, a resident and Myanmar-language media said on Sunday.

A spokesman for the military did not respond to calls requesting comment on the violence at Depayin in the Sagaing region, about 300km north of the capital, Naypyidaw.

The state-run Global New Light of Myanmar said "armed terrorists" had ambushed security forces patrolling there, killing one of them and wounding six. It said the attackers retreated after retaliation by the security forces.

Myanmar has been plunged into chaos by the Feb 1 coup against elected leader Aung San Suu Kyi, with violence flaring in many parts of the country of more than 53 million people.

One resident of Depayin, who did not want to be identified for fear of reprisals, said four military trucks dropped soldiers at the village early on Friday.

Youths from a local People's Defence Force, formed to oppose the junta, took up positions to confront them. But they had only makeshift weapons and were forced back by the security forces' heavier firepower, the resident said.

A total of 25 bodies had been collected after the fighting, the resident said by telephone.

Reuters was not able to verify the details independently.

The Depayin People's Defence Force said on its Facebook page that 18 of its members had been killed and 11 wounded. 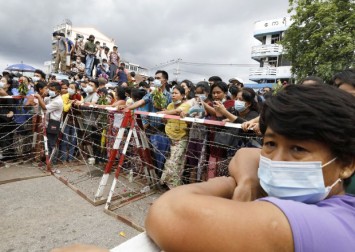 People's Defence Forces have been founded by opponents of the junta in many parts of Myanmar, some of them in association with a National Unity Government set up underground as a rival to the military administration.

About two dozen ethnic armed groups have fought for decades in Myanmar's borderlands, but Depayin is in the heartland of the ethnic Bamar majority, which also dominates the armed forces.

Violence since the coup has driven more than 230,000 people from their homes, the United Nations says. It also says more than 880 people have been killed by security forces since the coup and more than 5,200 are in detention.

The military authorities have said these figures are not true, but have not given their own estimates.

The army says its assumption of power was in line with the constitution. It alleged fraud in November elections swept by Ms Suu Kyi's party, although the accusations were dismissed by the former electoral body.