New Japan PM Kishida off to rocky start in polling

Former Japanese Foreign Minister Fumio Kishida attends a press conference at the Liberal Democratic Party (LPD) headquarters after he was elected as the party president in Tokyo, Japan, on Sept 29, 2021.

On the lower end, the daily Asahi put Kishida's approval rating at 45 per cent while Mainichi put it at 49 per cent. The more conservative-leaning Yomiuri said 56 per cent supported his government, while the Nikkei had 59 per cent.

In all the polls, support for Kishida's new government was lower than that of his predecessor Yoshihide Suga's administration when it came into power last year, with the Asahi reporting a 20 percentage-point difference.

"I'm aware of the polling results, but also believe that there is quite a gap depending on the company that conducted the survey," said Kishida to reporters on Wednesday morning.

"Regardless, I will reflect on my actions based on these results - including the low approval ratings - and continue to work hard toward the upcoming election," he said.

Political consultant Takuma Oohamazaki said the results were not surprising, given that Kishida is popular within the Liberal Democratic Party (LDP) but has struggled to win the support of swing voters.

"The selection of cabinet members, which included people with a history of scandal, as well as reports of a strong influence from former premiers Shinzo Abe and Taro Aso, appears to have dampened the mood among swing voters," he added. 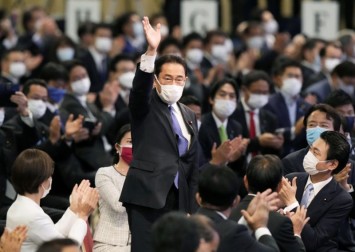 Although Kishida's ratings are low for a fresh administration, they are still higher than the most immediate ratings for Suga, who became deeply unpopular during his tenure as he struggled to contain a fifth wave of coronavirus infections exacerbated by the Delta variant.

Kishida said he would dissolve the lower house of parliament on Oct 14, and a general election is scheduled for Oct 31, with the handling of the Covid-19 pandemic and economic recovery set to become key issues.

Oohamazaki said that with Kishida's cabinet likely to be exposed to criticism from the opposition during parliamentary questioning starting Monday, approval ratings may continue to drop ahead of the elections.

"I don't think that drop will impact the election results too much, but we may be looking at the ruling coalition losing about 25 to 30 seats," he said.

For single-seat districts, the Mainichi poll said that 41 per cent of respondents would vote for the ruling coalition, while 34 per cent would vote for the opposition and 24 per cent were undecided. The Yomiuri put support for Kishida's LDP at 43 per cent, up 7 percentage points from the previous poll.

The premier unveiled his new cabinet on Monday. Although more than half of the ministerial roles were filled with fresh faces, the line-up also featured allies of former premiers Abe and Aso heavily, signalling their ongoing influence.