North Korea says lack of progress casts doubt on prospects for future summit with US: KCNA

"The US has done nothing for implementing the joint statement" from the first summit between Trump and Kim in Singapore last year, KCNA said, quoting North Korean Foreign Ministry adviser Kim Kye Gwan.

The official criticised the joint military drills between US and South Korea, as well as strengthened sanctions and pressure on North Korea.

Negotiations aimed at dismantling North Korea's nuclear and missile programs have stalled since a failed second summit between Mr Trump and Mr Kim in February. Pyongyang has said it is willing to restart working-level talks, but no date or location have been set.

Mr Trump said on Monday that he would want to know what would result from a third summit with Mr Kim before agreeing to hold it.

Read Also
US to give North Korea post-summit timeline with 'asks' soon: official 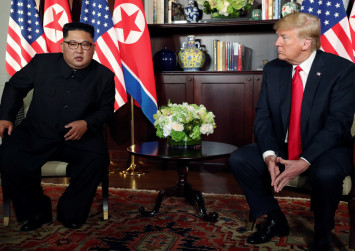 The official's statement also pointed out that "politicians in Washington are obsessed with" the assertion that North Korea can get access to a bright future only when it abandons its nukes first, and the view that sanctions led North Korea to dialogue was "twisted".

"This makes me doubt whether a new breakthrough could be brought about in the DPRK-US relations though another DPRK-U.S. summit talks may open," the statement said, using North Korea's official name, Democratic People's Republic of Korea (DPRK).

However, Mr Trump is "different from his predecessors in political sense and decision," Kim Kye Gwan said, and so he would like to place hope on Mr Trump's "wise option and bold decision."