SEOUL - North Korea would bolster its defences against the United States and consider restarting "all temporally-suspended activities," state media KCNA reported Thursday (Jan 19), an apparent reference to a self-imposed moratorium on testing its nuclear bombs and long-range missiles.

Tension has been rising over a recent series of North Korea missile tests. A US push for fresh sanctions was followed by heated reaction from Pyongyang, raising the spectre of a return to the period of so-called " fire and fury " threats of 2017.

Washington's policy and military threats had "reached a danger line," it said, citing joint US-South Korea military exercises, the deployment of cutting-edge US strategic weapons in the region, and the implementation of independent and UN sanctions.

The politburo ordered a reconsideration of trust-building measures and "promptly examining the issue of restarting all temporally-suspended activities," while calling for "immediately bolstering more powerful physical means," KCNA said.

"We should make more thorough preparation for a long-term confrontation with the US imperialists," it said.

The US State Department and White House did not immediately respond to a request for comment.

North Korea has not tested its longest-range intercontinental ballistic missiles (ICBMs) or nuclear weapons since 2017, amid a flurry of diplomacy with Washington after the North test fired a ballistic missile capable of striking the US mainland. 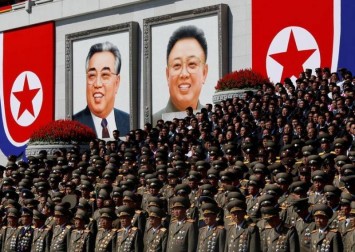 But it began testing a range of new short-range ballistic missiles (SRBMs) after denuclearisation talks stalled and slipped back into a standoff following a failed summit in 2019.

Pyongyang has defended the missile launches as its sovereign right to self-defence and accused Washington of applying double standards over weapons tests.

On Monday, North Korea conducted its fourth missile test this year, following two launches of " hypersonic missiles " capable of high speed and manoeuvring after lift-off, and another one involving a railway-borne missile system.

The unusually rapid pace of launches prompted US condemnation and a push for new UN sanctions, and Pyongyang threatened stronger actions.

The politburo decision appears to be a step beyond Kim's previous remarks in early 2020 that he would no longer be bound by the moratorium on nuclear and ICBM testing, after the United States did not respond to calls for concessions to reopen negotiations.

"We should brace for more sabre-rattling designed to create a warlike atmosphere - and possibly more provocation testing," said Jean Lee, a fellow at the Washington-based Wilson Center. "He will use any and every opportunity right now to justify further weapons testing."