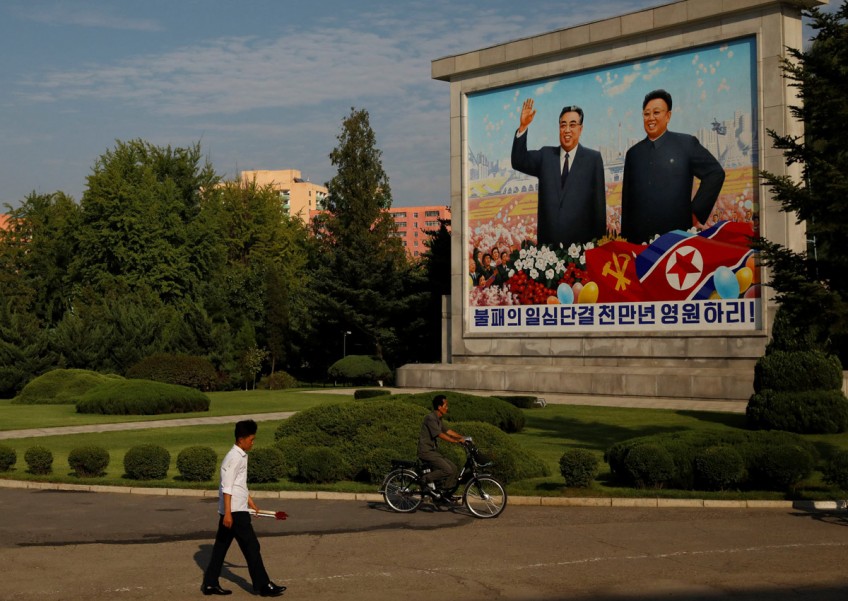 PYONGYANG - North Korea's celebrations marking its 70th anniversary on Sunday are expected to showcase a country that has secured a nuclear arsenal and is now focusing on developing its economy and cultivating international relations.

Sunday's events will kick off about a month of performances, as well as a trade show and other visits designed to drum up foreign investment and tourism spending in the sanctions-strapped country.

Having declared his nuclear programme "complete," North Korean leader Kim Jong Un will use Sunday's events to highlight his renewed focus on economic development, and possibly his diplomatic campaign that has netted him historic summits with the United States, China and South Korea this year, analysts say.

"It is a day Kim Jong Un should reminisce the past 70 years of the republic, and it is an event where he has the pressure to offer a long-term statecraft vision that looks into more than 10 years that follow," said Hong Min, senior researcher of Korea Institute for National Unification.

"However, it won't be easy for him this weekend, because he did not really achieve anything ground-breaking after he changed the national policy line to economy-first."

Economic sanctions against North Korea over its nuclear weapons development have been squeezing the impoverished state, where some 40 per cent of the population, or more than 10 million people, need humanitarian assistance and about 20 per cent of children suffer from malnutrition, according to UN estimates.

Under Kim's one-man rule, the country has also been accused of widespread human rights abuses, with a UN report last year estimating between 80,000 and 120,000 people are held in prison camps.

State media have called for the day to be "a celebration of the victor and continuously expand the results of the big economic development march."

For the first time in five years, Pyongyang is organising "Mass Games," a huge, nationalist pageant performed by up to 100,000 people in one of the world's largest stadiums.

In downtown Pyongyang on Thursday, thousands of children in school uniforms could be seen practising marching and playing music in Kim Il Sung square, and on street corners throughout the city.

Posters on major roads commemorated the anniversary and crews were seen patching the road between the airport and the city centre. One Air Koryo flight from Beijing to Pyongyang observed by Reuters was fully booked, mostly with foreign tourists and media.

The events, especially the photogenic Mass Games, offer North Korea a chance to raise foreign currency from thousands of international visitors pouring into the capital, at a time when tourism remains one of the few remaining reliable sources of income amid UN sanctions targeting 90 per cent of its $3 billion annual exports.

While ticket prices for past Mass Games topped out at 300 euros (S$560), this year VIP seats cost 800 euros, said Simon Cockerell, general manager for the Koryo Tours agency. The cheapest seats are 100 euros, with several other pricing brackets in between.

Despite the costs, demand is strong, he said.

"There's very high interest," Cockerell said. "All the flights are full, all the hotels are full. It's quite telling that Chinese tour companies were banned by the North Korean side from taking in any tourists until the middle of September, simply for capacity reasons."

The Korea Maritime Institute, a South Korean think-tank, estimates tourism generates $44 million a year for the isolated country, with Chinese tourists making up about 80 per cent of foreign visitors to the North.

So far, only one head of state, from Mauritania, is known to be visiting North Korea for the celebrations, something North Korea blames the United States for.

"The US is ... forcing other countries not to send high-level delegations to the celebrations of the 70th founding anniversary of the DPRK," the North's foreign ministry said in a statement published by state media KCNA last month.

After weeks of speculation that Chinese President Xi Jinping may make his first visit to Pyongyang on Sunday, Beijing announced on Tuesday the Chinese delegation would instead be led by parliament chief Li Zhanshu.

North Korea is also hosting a trade show and other trips aimed at attracting foreign investors later in September, but many will remain wary of sanctions that still block many aspects of trade with the North.

Michael Spavor, a Canadian business consultant who heads Paektu Cultural Exchange, said he is working with the North Korean government to bring about 25 Chinese investors and entrepreneurs to tour potential projects in Pyongyang, Wonsan and Nampho.

"We will attend matchmaking sessions with various government officials and stakeholders as well as visiting existing and future development zones," Spavor told Reuters.

Also on the expected schedule for Sunday is a torchlight procession, as well as a military parade, which will be closely watched for signs of new ballistic missiles or other advanced weaponry.

The website 38 North says satellite imagery suggests the military component of Sunday's parade could be bigger than one held earlier this year, although no long-range ballistic missiles or their launchers have been spotted.

"Display of military prowess has always been crucial in North Korean statecraft," Hong, the researcher, said.

"But North Korea does know that if they do display ICBMs, the international society will doubt their willingness for denuclearization. It's highly unlikely that North Korea would be risking it."