Official from Suu Kyi's party dies in custody in Myanmar

An official from Aung San Suu Kyi’s National League for Democracy died in custody in Myanmar overnight after being detained in a crackdown on anti-junta protesters, associates said, and a party leader said he suspected the man was tortured.

An officer at the police station in the Pabedan district of Yangon, the area where Khin Maung Latt was arrested on Saturday (March 6), declined to comment. A spokesman for Myanmar’s army did not answer phone calls seeking comment.

More than 1,700 people have been detained in Myanmar since the Feb. 1 coup, including elected leader Suu Kyi and dozens of members of her NLD, an advocacy group says. The Assistance Association for Political Prisoners (AAPP) also says more than 50 protesters have been killed by security forces.

According to his deputy chairman, pictures from the military hospital where he died showed he had a wound on the back of the head and bruises on his back.

“The doctor said those were not the cause of death,” Khin San Myint told reporters. “They said it was due to heart condition,” she said.

A charity worker who had seen the body said there were bruises on the head and chest and stitches on the side of the head. He declined to be named.

Reuters was unable to reach the doctor or the hospital for comment.

Khin Maung Latt was arrested after 9 p.m. on Saturday night, one friend said. 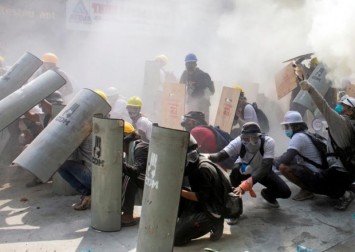 Ba Myo Thein, an NLD member of the upper house of parliament, which was dissolved after the coup, said the reports of bruising to Khin Maung Latt’s head and body raised suspicions that he had been abused.

“It seems that he was arrested at night and tortured severely,” he told Reuters. “This is totally unacceptable.”

The army has rejected accusations of using excessive force against protesters. It says it took power after the electoral commission rejected its allegations of fraud in an election last November in which the NLD won a landslide.

The army’s promise of new elections is scorned by protesters, who say the NLD’s victory must be respected.