One year on, boys of Thai cave rescue deal with fame

A young football team made up mostly of poor or stateless teenagers entered a tourist cave complex in northern Thailand a year ago on a day trip, accompanied by their coach.

They emerged 18 days later to global acclaim, courted by film producers, authors and talk show hosts eager to tell the remarkable story of a daring operation that rescued them from the flooded depths.

Most of the 12 "Wild Boars", as the team was known, still live in the poor northern town of Mae Sai, once a sleepy backwater but now inundated with selfie-snapping tourists.

They still play football - their coach who led them down the Tham Luang cave complex continues to run training - and they share the same basic homes with their families.

But life for the team has taken an extraordinary trajectory since they were rescued, led out of the cave heavily sedated by teams of expert divers.

They have signed a film deal with Netflix, travelled the world, and had their story chronicled in books, documentaries and a pipeline of films.

But their new-found fame has also forced silence on them, as the boys and their families can no longer talk freely about their ordeal - the result of exclusivity contracts that ban them from speaking to the press.

The boys were on a day trip to the cave complex on June 23 last year when up-country rains flooded the complex via underground waterways.

They were feared dead until two British cave divers negotiated a series of narrow waterways and corridors and found them on July 2, trapped in a damp chamber, 4km from the entrance.

It was then that Adul Sam-on, aged 14 at the time, became one of the stars of the drama.

He went into the cave complex as a stateless person - like several others in the group, including the coach Ekkapol Chantawong, denied citizenship in Thailand.

But he was thrust into the limelight by his gracious "thank you" spoken in English to the British divers who found the group, emaciated, cold, but alive, nine days after they went missing. 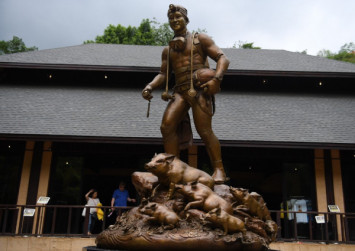 Born in Myanmar's self-governing Wa State and raised in Thailand, Adul lived in legal limbo with no birth certificate.

After their dramatic rescue, Adul, his coach and two other teammates were granted citizenship and passports for the first time, allowing them to travel to destinations from Los Angeles to Manchester.

With the anniversary of the start of the saga this Sunday, those close to the Wild Boars say fame has not changed them.

"He's an ordinary person just like before," Adul's friend Aman Sommol said from his school.

A dedicated student, Adul still teaches his friends English and helps them with homework.

"He's a role model for the younger kids at school," Aman said

Adul and several other Wild Boars now play for the Ekkapol Academy, a new club founded by Coach Ek, as he is known.

As he runs drills Ek smiles at the visiting media, but bound by Netflix's gag order he cannot talk about the cave drama.

His peers say he is delighted to have finally realised his dream of running his own football school.

"After the storm came calm, this is a new life for him," assistant coach Noppadol Kanthavong said.

Coach Ek also now heads a media company which will act as the go-between for the production houses, the boys and their families for a Netflix production that will include Crazy Rich Asians director Jon M Chu.

Fame has also come to some of the divers who helped rescue the boys.

After weighing several options, the boys and the coach were eventually given sedatives and brought out wearing wetsuits and full-face breathing apparatus in a series of relays.

Extracting everyone took three days because crews had to replace air tanks and other supplies, requiring up to twenty hours between each run.

Many of the rescuers were Thai Navy SEALs, some were experts running tourist dive operations, while others were lifelong cave hobbyists who flew in from Britain and Australia to assist.

All found themselves at the heart of a drama without precedent.

"When I arrived, I thought it was a suicide mission," said Ben Reymenants, a Belgian who runs Blue Label Diving in Phuket.

Among the rescuers was Saman Gunan, the only fatality during the near three-week saga.

Today a statue of the Navy SEAL, who ran out of oxygen in a twisting, flooded passage, stands near the cave's entrance.

Other rescuers like Vernon Unsworth were shunted into the media spotlight against their will.

The British diver is suing US tech mogul Elon Musk, who called him a "pedo" on Twitter after Unsworth questioned the billionaire's usefulness when he showed up at the rescue site.

Speaking to the BBC, Unsworth played down his central role in helping the trapped thirteen to safety.

"None of us are heroes. We just did a job we were asked to do," he said. "Thirteen is not an unlucky number any more."