About 20 passengers took advantage of the free shots on the opening day of the programme on June 30, 2021.

JAKARTA - Indonesian airline Garuda started administering free coronavirus vaccinations to holidaymakers and travellers on Wednesday (June 30), as part of efforts to reduce the impact of the virus in one of Asia's worst-affected countries.

About 20 passengers took advantage of the free shots on the opening day of the programme on Wednesday at Soekarno-Hatta International Airport, which has the capacity to vaccinate 200 domestic travellers per day.

"This vaccine gives me confidence but we still have to obey health protocol because we're not 100 per cent immune. But at least it gives a sense of calm," said Mr Cecep Taufiqurohman, 32, after receiving his vaccine.

Flag carrier Garuda is offering the Sinovac vaccine to help expedite a national immunisation programme that had a slow take-off, with only 13 million of the country's more than 270 million people fully vaccinated since January.

Indonesia has reported record new infections in two of the past three days, and authorities are considering emergency restrictions to arrest the spread.

"We can reach herd immunity in society and we can leave the pandemic behind," said the airline's director of service Ade Susardi, explaining the aim of the project. 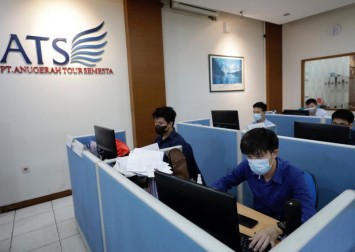 President Joko Widodo on Wednesday pledged to increase vaccinations to one million doses per day in July and two million in August, up from what he said was about 200,000 to 300,000 a day at present.

Passenger Rika Fitriani said she had struggled to get a second dose after postponing her appointment in May, so Garuda's offer meant she could get both a vaccine and a vacation.

"I'm just afraid of crowds these days because I have a baby and that's why I chose Garuda, so I can go on holiday too," she said.