Papuans on trial in Indonesia ordered to remove penis gourds 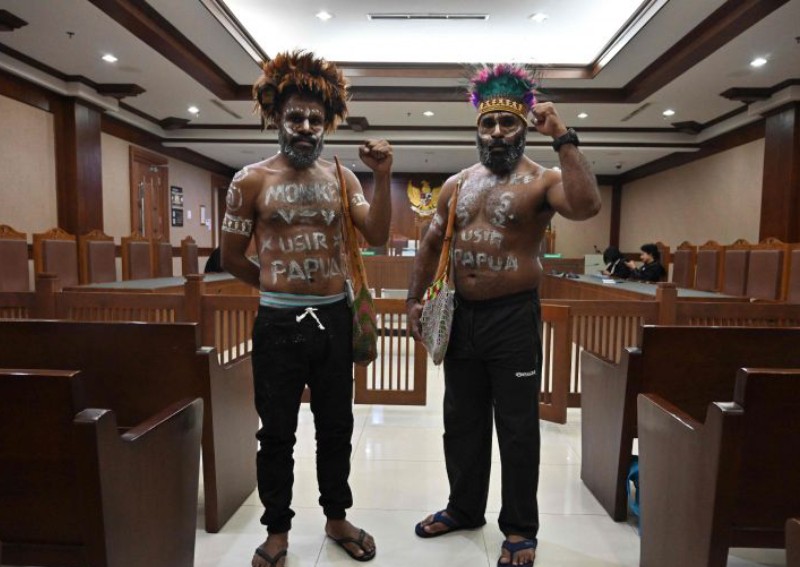 Papuan activists Ambrosius Mulait and Dano Anes Tabuni are seen prior to a court hearing in Jakarta on Jan 20, 2020.
AFP

JAKARTA - Two Papuan activists on trial for treason in Indonesia's capital decried what they described as "racism" after the court on Monday (Jan 20) ordered them to remove traditional penis gourds.

The Jakarta hearing descended into a standoff as the panel refused to proceed until the men put on pants - the second time their native garb led to delays in the trial of a total of six activists.

After several hours of negotiations, the pair - also wearing Papuan headgear with their faces painted and the words "monkey" scrawled on their bodies - grudgingly agreed to put on trousers.

One activist, Ambrosius Mulait, said the outfit was "part of my identity".

"We have been the victims of racism outside the court and now we have fallen victim to racism inside the court," he said.

Papua has seen several spasms of violence in recent months, including deadly unrest partly linked to a fresh push for independence and racism against Papuans, who have been called monkeys and other slurs.

Ethnically Melanesian, most Papuans are Christians who have few cultural links to Muslim-majority Indonesia.

The half-dozen defendants were arrested in August after participating in a demonstration at the presidential palace in Jakarta where Papua's Morning Star flag was raised.

The flag, a symbol of independence, is illegal in Indonesia.

Jakarta is deeply sensitive about its easternmost region, where a low-level insurgency has simmered for years.

A former Dutch colony, Papua came under Indonesian control in the 1960s after a self-determination vote widely viewed as a sham.