In parched central India, no water means no wife

Mr Ram Hetu was sure his 16th proposal would finally secure him a wife, but it didn't - just like all his other attempts to find a partner in central India's Bundelkhand region, where years of drought and water scarcity are keeping possible brides at bay.

Wells have run dry across the semi-arid region, with scant rains forcing some villagers to walk miles for water and pushing others to migrate to cities in search of work, as harvests fall.

But the drought also has more pernicious consequences.

In towns and villages across sparsely populated Bundelkhand, home to 20 million people, parents of would-be brides are dismissing the overtures of hopeful suitors, fearing a betrothal could land them in financial ruin.

"In January, one father said 'maybe' and immediately I started daydreaming about my wedding." But calls to his would-be father-in-law went unanswered.

"Parents fear their girls will spend the rest of their days fetching water," Mr Hetu said in his village of Baragaon, known for growing wheat, barley and chickpea.

His story is echoed by other men from Bundelkhand who told the Thomson Reuters Foundation that years of drought had ruined their crops and trapped them in bachelorhood.

It is just one of many social impacts linked to climate change in a country increasingly hit by extreme heat, rising sea levels, frequent floods and powerful cyclones.

"If efforts aren't made while we still have time, then existing problems of unemployment, starvation (and) malnutrition will only become more severe," he added.

India's northern areas were lashed by monsoon rains and fatal floods in recent weeks but dry spells have gripped other parts, including the city of Chennai which was plunged into crisis in June when its four main water reservoirs ran dry.

Normally, Bundelkhand, blighted by 13 episodes of drought in the last two decades, receives 52 days of rainfall a year. But the number of days has more than halved since 2014, according to Skymet Weather, a private weather forecasting agency.

"Water is everything. It is a currency. If you have it, you have everything, including a wife. If not, you have nothing,"said Mr Dhaniram Aherwal, head of Bangaon village's water council.

When rains fail and crops perish, incomes and marriage prospects suffer, prompting waves of migration to nearby cities.

Two in five people in rural Bundelkhand have become urban migrants over the last decade, according to Mr Keshav Singh, an environmentalist at the India Water Portal website.

Bad water management and poor policies are to blame, said Mr Singh, who is also part of the Bundelkhand Water Forum, a coalition of local organisations.

"If things continue this way, Bundelkhand will be known as a land of bachelors," he said.

Empty homes with metal locks on front doors are a common sight.

Villagers said nearly 200 pack up and leave each year, either temporarily or permanently.

"There have been no weddings here for at least two years,"said Mr Nishad, standing outside a derelict wedding hall strewn with cow dung.

Not everyone heads to the city. Farmer suicides over failed crops and crippling debt have left "drought orphans" and widows, who often fall prey to traffickers looking to push them into prostitution, said Mr Singh.

And with so many men desperately seeking wives, traffickers find opportunities to lure prospective brides into the region from other states, he and other activists said.

In water-scarce Chhatarpur district, scores of men have married women from nearby Odisha state.

Three women told the Thomson Reuters Foundation that a "tout" found them and promised a perfect match - a man with land and a concrete house with an adequate water supply.

"But that wasn't the case. Back home, water came from taps. Here it is all hand pumps. Water tankers don't come... No one had told me that things were so bad," said Ms Rina Pal, 30, who came to Chaukheda village 12 years ago.

Child marriage is also rife, according to locals.

Many young girls never go to school because of costly tuition fees, they said. Instead, parents send them to fetch water. Viewed as a financial burden, they are married off as young as 12.

Ms Seema Aherwal, a bride at 18, said men failed to understand how unattractive Bundelkhand villages could be for women.

"You can't blame women. It's terrible here. Water dictates life - when to eat, sleep, bathe - everything," said Ms Aherwal, now 28 and planning to move her family to Delhi after living in Bangaon for a decade. 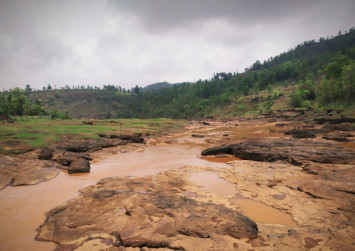 Rocks are one major problem, according to Mr Saurav Kumar Suman, administrative head of Tikamgarh district, who said that Bundelkhand's rocky terrain stops rain water from percolating into aquifers and recharging groundwater supplies.

Others say humans are at fault. With the increasing demand for water, unregulated exploitation has emptied natural reservoirs.

Determined to stem the exodus and repair confidence in the region, civil society groups and government agencies are trying to revive water bodies, de-silt ponds and build dams for irrigation and rainwater harvesting.

"Locals now claim that some of the men who had migrated (for work) have started to return because of the availability of water," said Mr Farrukh Rahman Khan, WaterAid India's manager for the northern region.

But for Mr Rajendra Litoria, 48, who cares for his elderly parents, moving away was never an option. Instead he has shelled out hundreds of dollars' worth of fees to marriage brokers over the past decade to scout for a bride.

"Who will take care of me when I'm old? Who will I leave my land to? Who will perform my last rites?" he asked. "I worry all the time but I haven't lost hope. I still believe I will get married."