Philippines President Rodrigo Duterte gestures during Change of Command ceremonies of the Armed Forces of the Philippines (AFP) at Camp Aguinaldo in Quezon City, metro Manila, Philippines on Oct 26, 2017.

MANILA - A group of 13 high-profile organisations has urged government cooperation in a probe into alleged misuse of pandemic funds in the Philippines, challenging President Rodrigo Duterte's order to ministers not to answer summons for a Senate investigation.

The call for compliance by the groups, among them academic, business and religious organisations, is the strongest and broadest yet over the alleged foul play in the government's handling of US$1.3 billion (S$1.7 billion) of funds.

"We call on all parties to pursue and cooperate with this investigation to the fullest extent allowed by law," the statement said.

"We call on lawmakers, members of the executive department, constitutional commissions and, if they are brought in, members of the judiciary to conduct their proceedings with integrity, transparency, and respect, and in compliance with our laws and established procedures," it added.

The investigation follows the state auditor's flagging of "deficiencies" in how supply contracts were handled, alleging corruption from overpriced deals, among other irregularities.

The funds were allocated to cover benefits of health workers and medical supplies.

Duterte last month ordered cabinet members to seek his consent before appearing in Senate hearings. His government has denied misuse of the funds. 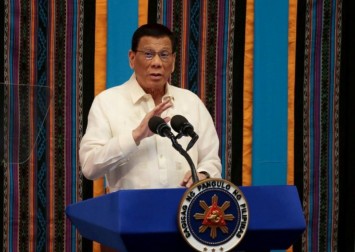 "There is no iota of evidence of over pricing or money lost to corruption," Duterte said in a late night address on Monday (Oct 4), and told senators not to use the investigation "as a witch hunt in aid of election."

He said he was not opposed to the Senate investigation but disapproved of how the public inquiries, which last for hours, have interfered with the work of cabinet members required to attend, including those related to the pandemic response.

The Philippines has recorded more than 2.6 million Covid-19 cases and over 38,800 deaths, and is one of Asia’s worst-affected countries in terms of casualties and economic losses.

The group's call for a transparent investigation comes at a sensitive time for the Duterte administration, just days away from the closing of a window for many of his allies to register for elections next year.

Duterte, 76, who was elected on promises to eliminate graft completely, cannot seek a second term and had been expected to run for vice president next year.

But at the weekend he declared he would retire from politics, days after an opinion poll on preferred vice president candidates showed him slipping into second place.