President Rodrigo Duterte has ordered the holiday destination off limits to tourists from Thursday, saying the tiny island has become a "cesspool" tainted by dumped sewage.

As part of police drills, officers in full riot gear clashed with bottle-throwing people playing the part of protesters on the white sand beach while concerned residents watched.

"I was alarmed there were so many soldiers and police," resident Dory Gaitano told Agence France-Presse (AFP). "I thought they'll be only demolishing establishments with violations. Why are there countless soldiers?"

At the same time, a very real clash was brewing on Wednesday, as Boracay residents and workers asked the Philippine Supreme Court to halt the closure.

"It is, mainly, a constitutional challenge to the powers of the executive to arbitrary decision-making," their lawyers said in a statement.

"If Boracay is closed to tourists, they will lose their source of income, and they would not be able to feed their families."

With its world-famous powdery white sand, Boracay was known as the crown jewel of Philippine tourism. But unchecked tourism and environmental degradation made it far from the tropical paradise it was decades ago.

The authorities say some of the hundreds of tourism-related hotels and restaurants use the island's drainage system to send untreated sewage into its surrounding turquoise waters.

The closure threatens the livelihood of 17,000 hotel, restaurant and other tourism workers, plus about 11,000 construction workers. 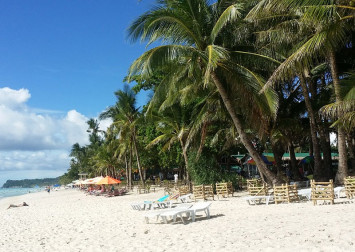 Mr Duterte has said he will release two billion pesos (S$50 million) to help the workers, but they say they have not seen a penny yet.

"My son has epilepsy and I am paying for his treatment. The government is offering a job but I am still waiting: What job and when? I will take any job as long as I have a daily income," souvenir vendor Jenelyn Besana told AFP.

Restaurants and bars have put up signs offering discounts, with most items on the menu already unavailable.

Vendors slashed 50 per cent off sunglasses and selfie sticks while tourists scrambled to get hold of Boracay souvenir shirts sold at half price.

"We call it the closure sale. We used to sell key chains in a 'buy one, get one' promo. But now we sell 'buy one, get 10'," said vendor Jenie Dagunan.

"We can't eat these bracelets, might as well turn them into money."