Philippine President Rodrigo Duterte gestures as he delivers his 6th State of the Nation Address (SONA), at the House of Representative in Quezon City, Metro Manila, Philippines, on July 26, 2021.

MANILA - Leaders of Philippine President Rodrigo Duterte's political party have endorsed him to be a vice-presidential candidate in next year's elections, paving the way for him to stay in power for six more years after he steps down in 2022.

The move needs to be approved by the party general assembly, which meets next month.

In the Philippines, the president is limited to one six-year term. Mr Duterte's term ends in June next year, but he has said he is seriously thinking about running for vice-president, which political observers and critics say could be a backdoor to the presidency.

Next year's polls will be a referendum on Mr Duterte's policies, including his bloody war on drugs, in which thousands of people have been killed, and the handling of the pandemic, many political analysts say.

The backing for Mr Duterte was announced by Mr Melvin Matibag, secretary-general of the ruling PDP-Laban party, who said the endorsement by the key officers will be presented to a national assembly of the party next month for approval.

"We are hoping the entire membership can carry it. That is the popular and logical choice of PDP-Laban leaders," Mr Matibag told a media briefing. 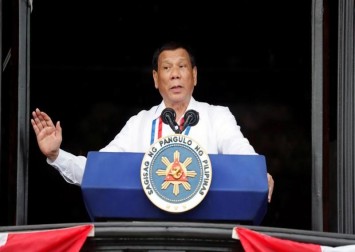 Mr Duterte, who has portrayed himself as a reluctant president with no desire for power, has on several occasions said he wanted Mr Go to be his successor. His endorsement in 2019 helped Mr Go to become a senator, a job he combines with being Mr Duterte's personal aide.

Mr Go has repeatedly said he was not interested in the presidency, and the only thing that could change his mind was if Mr Duterte agreed to be his running mate.

But Ms Sara and her father have both said they are against the idea of her running.

The filing of candidacy papers for next year's polls will start in October. Until then everything is just speculation and "every noise could just be posturing," said political analyst Victor Manhit.