Residents queue to receive cash assistance from the government following the imposition of a two-week lockdown to prevent the spread of the coronavirus Delta variant, at an elementary school in Manila, Philippines on August 11, 2021.

MANILA - Vaccination centres across the Philippine capital Manila are trying to speed up inoculation rates, including staying open for 24 hours, to help combat a sharp rise in Covid-19 infections linked to the spread of the highly contagious Delta variant.

With just over 10 per cent of the country's 110 million people fully vaccinated, millions remain vulnerable to infection amid efforts to fully immunise up to 70 million before the year ends.

Movement in Metro Manila, urban sprawl of 16 cities home to 13 million people, has been restricted to try to contain the Delta variant, which was first detected in India.

Salvador Camacho, 71, got over his initial worry about side effects and decided to get his jab when a slot opened for a night appointment at one of the 24-hour hubs.

"I do not really want to be inoculated because I have a lot of sicknesses, but lately I see a lot of people older than me getting vaccinations, and my child and wife told me to take my jab since we never know when I might get infected," he said.

Joan Carbonell, who works as a supervisor in a Manila vaccination hub, said the decision by some hubs to open at night was also to limit crowds in the morning as people scramble to get a shot. 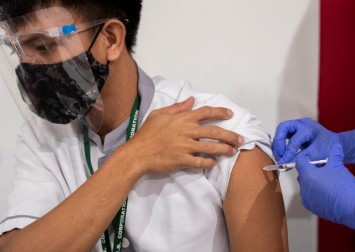 Last week, thousands queued outside Manila vaccination centres after rumours spread that people would not be able to leave their homes if they did not get their shots.

The Philippines has reported more than 1.67 million infections and 29,000 deaths so far during the pandemic, but the number of positive tests has been rising, driving a surge in cases and hospitalisations.

The positivity rate rose for a sixth day straight on Tuesday (Aug 10) to 21.9 per cent, up from around 15 per cent at the start of August, data from the health ministry showed.

The World Health Organization (WHO) says the positivity rate should stay below five per cent for a two-week period for an outbreak to be considered under control.

Meanwhile, more hospitals have reported that their intensive care units, isolation beds and wards are nearing full capacity, and some have had to refuse new patients because of a lack of beds and ventilators.

Philippine hospitals with occupancy at critical levels rose to 289 on Tuesday from 236 on Sunday, reaching more than a fifth of the country's 1,290 hospitals, government data showed.