President Rodrigo Duterte (above) has waged a war on drugs that killed thousands of users and peddlers.

MANILA - Philippines leader Rodrigo Duterte declared on Thursday (Nov 18) in a televised speech that an unnamed candidate for next year's presidential election was a cocaine user.

Duterte, who waged a war on drugs that killed thousands of users and peddlers, did not name the candidate, nor provide evidence to support his allegation, but said he was "a very weak leader".

Dozens of people have registered to run for president in next year's polls. Duterte, 76, is not eligible for re-election due to the constitution's one-term limit.

"We have a candidate using cocaine," Duterte said in a speech in the province of Oriental Mindoro.

"That is why I am wondering, 'What has this person done? What contribution has he made for the Philippines?"

"Why are the Filipinos crazy supporting... I am just asking," said Duterte, who will run for a seat in the senate next year.

Reuters asked Duterte's acting spokesman, Karlo Nograles, who the president was referring to and for more details, but received no immediate response. 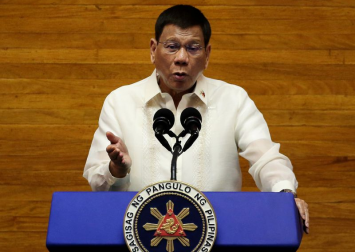 "He is a very weak leader," the outspoken Duterte said of the unnamed candidate.

"He might win hands down. If that is what the Filipino wants, go ahead," he said in the speech, confirmed by a transcript provided by his office.

"I am not making intrigues. It is up to you. Find out who."

In the same speech, he praised his chosen successor and longtime aide, Christopher "Bong" Go, a senator who is seeking the presidency.