The bodies of Noberto Maderal and fellow pedicab driver George Avancena, killed during a drug-related police operation, are taken away by funeral parlour workers in Manila, Philippines on Oct 19, 2016.

MANILA - An initial investigation by the Philippine government has found 154 police officers could be criminally liable over their conduct in President Rodrigo Duterte's bloody war on drugs, in a rare admission by the state that abuses may have taken place.

The findings, announced by Justice Secretary Menardo Guevarra on Sunday (Oct 3), come just a few weeks after the International Criminal Court (ICC) approved a formal investigation into thousands of state killings of alleged drug dealers since Duterte took office in 2016.

The government had said it will not cooperate with an international probe because the Philippines has a justice system that is functioning.

The popular Duterte, 76, has dared the ICC to put him on trial and publicly said he would happily "rot in jail" for killing people intent on destroying his country.

Duterte is stepping down as president in 2022, and political analysts expect him to anoint a successor who could insulate him from potential legal action at home or by the ICC, once he is out of power.

In a late-night address on Monday, Duterte said he would wait for the cases to be filed against him, even as he insisted the ICC has no right to meddle in the country's affairs.

"I will prepare for my defence," Duterte said. "That ICC, just don't lie," he said.

Activists say systematic cover-ups and executions of thousands of users and pushers have not been prosecuted. Police have denied wrongdoing and say the killings were in self-defence. 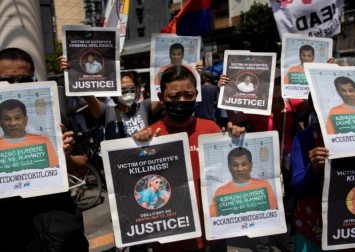 "The police officers involved in these cases were not only administratively liable. The existing evidence pointed to their possible criminal liability as well," Justice Secretary Menardo Guevarra told reporters, without elaborating.

The review, according to the government, was part of Duterte's commitment before the United Nations General Assembly that police responsible for murder would be held accountable.

The police and justice ministry reviewed 52 cases where suspects were killed in what police recorded as anti-narcotics operations. Those would be sent to state investigators for further action, Guevarra said.

He said 100 more cases would be looked at, which were pending preliminary investigation or under court trial.

Officially, 6,200 drug suspects were killed in what police said were sting operations where suspects resisted arrest.

Activists say many thousands more people, mostly users or small-time dealers, were killed in slum communities by mystery gunmen. Police have denied involvement in those deaths.