HONG KONG - Anti-government protesters dug in at several university campuses across Hong Kong on Wednesday, setting the stage for further confrontations as police said violence in the Chinese-ruled city had reached a "very dangerous and even deadly level".

Protesters - many of them young students - spent much of Wednesday fortifying barricades and stockpiling food and makeshift weapons, as other roving bands of masked protesters disrupted transport and businesses in many areas.

As night fell without more of the large on-campus clashes seen the previous day, protesters manning the barricades and checkpoints around the universities arranged to sleep in shifts to watch for any approaching police.

Demonstrators have been protesting since June about what they see as meddling by Beijing in the freedoms guaranteed under the "one country, two systems" formula put in place when the former British colony returned to Chinese rule in 1997. Allegations of police brutality have fuelled protesters' anger.

China denies interfering in Hong Kong's affairs and has blamed Western countries, including Britain and the United States, for stirring up trouble.

In the heart of the city's Central business district on Wednesday night, police used an armoured vehicle with an officer firing less-than-lethal rounds from the roof to ram a barricade and disperse protesters who had been blocking traffic.

Nearby, protesters also blocked the entrance to the Cross-Harbour Tunnel that links Hong Kong island to the Kowloon area, according to the city's Transport Department. 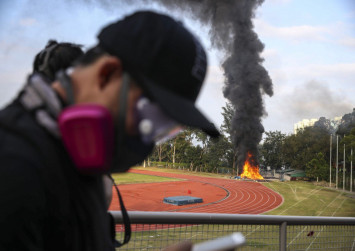 Earlier in the day, about 1,000 protesters blocked roads in the Central district at lunchtime. Wearing now-banned face masks and dressed in office wear, they marched and hurled bricks on to roads lined with some of the world's most expensive real estate and luxury flagship stores.

Scores of riot police tried to disperse the crowds near the stock exchange, wrestling some people to the ground and beating others with batons.

At the Chinese University of Hong Kong (CUHK), where multiple people were injured in clashes between riot police and protesters on Tuesday, police accused protesters of running a "weapons factory" making hundreds of petrol bombs that were thrown at officers.

"A university is supposed to be a breeding ground for future leaders, but it became a battlefield for criminals and rioters," Hong Kong police spokesman Tse Chun-chung told reporters.

Police confirmed that they had evacuated a number of mainland Chinese university students from Hong Kong by boat, while Taiwan's Mainland Affairs Council said dozens of Taiwanese students were also due to leave the city due to safety concerns.

"The youngsters are really the future of Hong Kong so even though I'm worried about being checked by the police I still want to come and support them," said Cheung, a 30-year-old alumni bringing supplies including food to one campus. 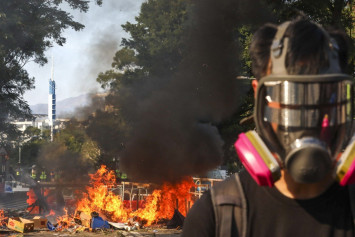 Protesters and police had battled through Tuesday night at university campuses only hours after a senior police officer said the city had been pushed to the "brink of a total breakdown".

Hong Kong leader Carrie Lam met with city government officials late on Wednesday, according to public broadcaster RTHK, though the exact details of the meeting were not released.

Hong Kong's Education Bureau said all schools would shut on Thursday. Several universities said they would be introducing online learning and other assessment methods for the remaining weeks of the term.

The flare-ups came after police shot a protester at close range on Monday and police said "rioters" doused a man with petrol and set him on fire in some of the worst violence so far.

The turmoil caused delays for thousands of commuters who queued at metro stations across the city early on Wednesday, after some railway services were suspended and roads closed.

"It is very painful to watch my city turn into this. Look at everyone, how angry they are," said Alexandra, a 42-year-old insurance executive who had been trying to get to work.

"We all want to return to normal, but how can the government do that if they don't listen to what Hong Kongers have been asking for." 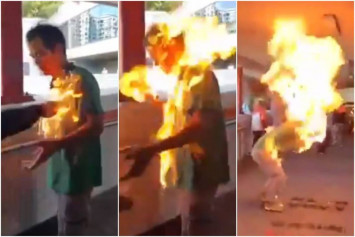 Police said 142 people had been arrested since Tuesday, bringing the total number of arrests to more than 4,000.

Hong Kong's Hospital Authority said 81 people had been injured since Monday, with two in serious condition.

Police used tear gas and other equipment to clear protests in several areas of the city in the evening.

Many banks and shops in bustling commercial areas shut on Wednesday, while Hong Kong's Jockey Club cancelled its evening races.

The Association of Asia Pacific Airlines announced on Wednesday it would cancel the Assembly of Presidents meeting scheduled to take place in Hong Kong later in November. The decision comes a week after major back-to-back conferences on air finance, a key growth area for Hong Kong.