Greenpeace activists protest in front of the Foreign Ministry ahead of the 34th ASEAN summit in Bangkok on June 20, 2019.

BANGKOK - Protesters in Bangkok on Thursday (June 20) dumped plastic waste in front of a government building and called on South-east Asian leaders to ban imports of trash from developed countries.

The protest comes ahead of a weekend meeting of the 10-member ASEAN, with many countries struggling to deal with the flood of plastic waste unleashed by China's decision last year to stop importing recyclables from abroad.

Countries in ASEAN now receive more than a quarter of global plastic waste, most of which comes from developed economies like Canada, the US, Australia and Japan.

A group of about 50 Thai activists, some holding placards reading "No Space for Waste", joined Greenpeace campaigners to call for an end to all trash imports to South-east Asia.

"The communities are here today to reclaim... the right to live in a sustainable environment in Thailand," said Tara Buakamsri of Greenpeace Thailand. 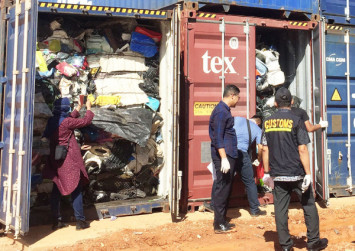 They called for ASEAN countries to ban the export of waste "from anywhere in the world into the region", Tara said.

The trash pile-up in South-east Asia accelerated after China stopped accepting waste in 2018, and Greenpeace says plastic refuse imports have increased by a staggering 171 per cent since 2016.

The imported waste is supposed to be recycled, but sometimes arrives mixed with unrecyclable items or is improperly handled and ends up being burnt or leaked into waterways and the sea.

The issue has been in the headlines recently after the Philippines sent a huge shipment of garbage back to Canada, sparking a diplomatic row.

And last week, Indonesia returned five containers of rubbish to the US, saying it refused to be a "dumping ground".

Thailand currently imports waste from scores of countries, much of it ending up in landfills and waste disposal facilities that have prompted pollution complaints from residents. 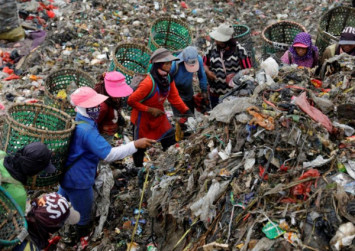 "There is air, dust, and water pollution... it burdens the Thai people," said Jorn Naowaopas, an activist from Chachoengsao province where several dumpsites are located.

The contaminated groundwater run-off and toxic fumes caused by disposing of plastic and electronic waste can cause serious environmental and health problems if not properly treated.

The ASEAN summit, which kicks off on Saturday with a foreign ministers meeting, has not put the waste issue on its agenda.

But discussions will have as a "priority" the issue of marine waste because it affects "the food chain of people worldwide", Thai government spokesman Werachon Sukondhapatipak said on Wednesday.