Protesters take cover behind barricades during a demonstration against the military coup in Mandalay, Myanmar, March 21, 2021.

A grouping of 45 Southeast Asian non-governmental organisations has urged regional leaders to include Myanmar lawmakers ousted by the military to attend a summit on Saturday (April 24) to discuss the turmoil in that country.

The Association of Southeast Asian Nations (Asean) summit is to be held in Jakarta, Indonesia. Myanmar's junta chief, who ousted the civilian government on Feb 1, is likely to attend, diplomats and officials in the host nation have said.

"Asean leaders will not be able to achieve anything at this summit to solve the current crisis without consulting and negotiating with the rightful representatives of the peoples of Myanmar," the NGOs said in a letter published on social media.

They said the invitation to junta chief General Min Aung Hlaing to attend the summit "provides legitimacy... to the genocidal slaughter being committed by the military regime against its own citizens and people". 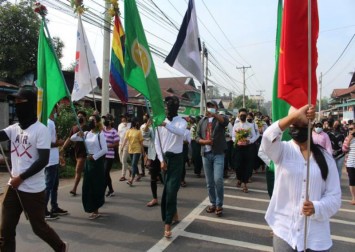 The meeting is the first concerted international effort to ease the crisis in Myanmar, where security forces have killed hundreds of pro-democracy protesters since the February coup.

It is also a test for Asean, which traditionally does not interfere in the internal affairs of a member state and operates by consensus.

Myanmar's military has shown no sign of wanting to talk to members of the government it ousted, accusing some of them of treason, which is punishable by death.

The foreign minister of China, Myanmar's giant neighbour and which many protesters say supports the junta, said he hoped the summit would pave the way for a "soft landing".

China is not a member of Asean, but is included in an Asean Plus Three grouping, along with Japan and South Korea. It was not immediately clear whether China will be attending Saturday's meeting in Jakarta. 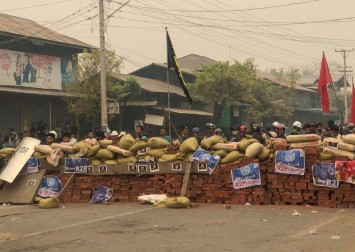 "China will maintain close communication with Asean, and continue to handle any work related to Myanmar in its own way," said China's State Councillor Wang Yi, who is also foreign minister.

Last week, Myanmar's pro-democracy politicians, including ousted members of parliament, announced the formation of a National Unity Government that nominally includes deposed leader Aung San Suu Kyi, who has been in detention since the coup, as well as leaders of the protests and ethnic minorities.

The Assistance Association for Political Prisoners, a Myanmar activist group, says 739 people have been killed by security forces since the coup and 3,300 people are in detention.