Search and rescue personnel and locals gather at a jade mine following a landslide in Hpakant, Kachin state.

YANGON - Recovery teams in Myanmar fought against a huge lake of sludge on Wednesday (April 24) in their search for bodies after a landslide engulfed more than 50 jade miners - the latest fatal accident in a notoriously dangerous but highly lucrative industry.

The disaster struck the mine in Hpakant township in northern Kachin state late on Monday night.

Police initially described how a "mud lake" buried 54 miners - all feared dead - while there were sleeping, although they said on Wednesday that the men had been working a night shift at the time. 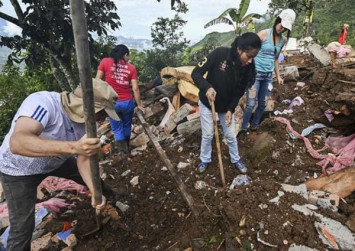 By nightfall on Tuesday, only three bodies had been recovered, a police officer from Hpakant Township, who asked not to be named, told AFP.

"Searching in the mud is difficult - it's not like soil," he added.

The open jade mines in Hpakant township have turned the landscape into a vast moonscape-like terrain of barren hills and vast valleys of dirt scoured by companies for the precious gems.

Impoverished ethnic communities often scavenge the terrain for scraps left behind by big firms - and are frequently the main victims of landslides.

But police told AFP that there were "no informal workers" on the site at the time of this mudslide.

A major collapse in November 2015 left more than 100 dead, while in July last year, the bodies of 23 victims were recovered after a search hampered by heavy monsoon rains.

The jade industry is largely driven by insatiable demand from neighbouring China, where the translucent green gemstone has long been prized.

Watchdog Global Witness estimated the industry was worth some US$31 billion (S$42.14 billion) in 2014, although very little reaches state coffers.

The administration of former US president Barack Obama lifted jadeite and rubies sanctions in 2016, despite concerns from watchdog groups of the abuses plaguing the industry and its ties to former junta stalwarts.