SEOUL - North Korea has again pushed back the construction end-date of a massive beach resort - a move analysts say shows the regime is struggling from international sanctions imposed over its nuclear weapons programs.

The eastern seaside strip, known as the Wonsan-Kalma Coastal Tourist Area, is intended as a centrepiece of the isolated country's nascent tourism industry as Pyongyang seeks to develop its economy despite the tough economic measures.

The site's construction has been closely overseen by leader Kim Jong Un and was initially scheduled to open this April, to mark the birthday anniversary of the country's founder Kim Il Sung.

But in a recent visit to the site, Kim delayed the finish date for the second time, ordering construction to be completed by the same time next year, the North's official Korean Central News Agency (KCNA) reported Saturday. 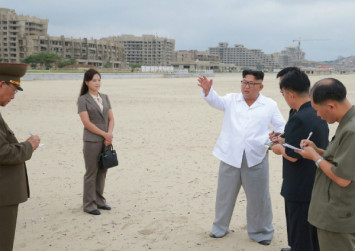 The decision would allow the workers "to perfectly finish it so that our people would fully enjoy themselves in the impeccable tourist area from the sea-bathing season next year," KCNA quoted Kim as saying.

The plan was first pushed back last August when Kim extended the project by six months to October 2019.

The isolated North is under several sets of sanctions for its weapons programs, which analysts say have hampered efforts to secure materials needed to finish the vast beach complex.

"North Korea can complete the external construction of the hotels by itself but most of the finishing materials for the interior are imported," Cho Han-bum, a senior researcher at the Korea Institute for National Unification, told AFP.

The economic measures banned imports of some items and Pyongyang was supplying the sanctioned goods with its foreign currency, Cho said, adding: "But that has also dried up."

Satellite images taken by US monitors in December showed the buildings previously under construction were nearing completion.

"The North Korean economy has hit a limit with the sanctions," Cho added.

Immediate sanctions relief was a key demand of the cash-strapped North when Kim met with US President Donald Trump in Hanoi in February for a second summit that ultimately broke down.