Scores of poll winners could be disqualified in Thai vote

BANGKOK - Thailand's Election Commission said Friday (April 5) that scores of candidates who were tipped to secure elected seats in last month's contentious polls are under investigation and could be disqualified, in a move that could shift yet-to-be-released final results.

The commission has come under fire for bungling ballot counts and delaying official results following the much-anticipated March 24 election, the first since a 2014 military coup.

The election has pitted the junta-backed Palang Pracharat party against Pheu Thai, a popular anti-military faction linked to an exiled billionaire.

Both have claimed the right to govern in the wake of polls with final tallies not expected for several weeks. 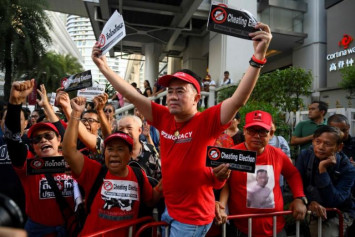 An election commissioner said Friday the body will investigate "66 people who got the highest votes in the constituency system" who were hit with complaints.

"Whether these 66 candidates would be disqualified would have to depend on our investigation," said commissioner Pakorn Mahannop.

He added that investigation results "will affect the calculation" of final parliamentary seats.

Commission officials did not say what parties the candidates belonged to but said 300 complaints had been filed.

The vote is governed under a new military-scripted constitution that delegates 350 lower parliament seats to candidates who won their constituencies.

Another 150 "party list" seats will be allocated based on popular vote.

The 250 upper house seats are military-appointed, stacking the balance of power strongly in its favour.

Thailand's Election Commission has been dogged with criticism since the poll over bungled vote counts, inconsistent tallies and more than 2.1 million invalidated ballots.

Earlier this week it ordered a re-count in two polling stations and a new vote in six polling sites, citing conflicting numbers between voter turnout and ballots tabulated.

The body had previously said a final tally would be announced by May 9, but Pakorn said Friday complete results may take even longer.

Early numbers showed Pheu Thai, the party linked to ex-premier Thaksin Shinawatra, securing the majority of the constituency seats, with 137.

Junta-backed Palang Pracharat followed them with 97 seats, but they gained the highest in the popular vote - which tips their prime minister candidate junta leader Prayut Chan-O-Cha to return as a civilian premier.

Pheu Thai spokeswoman Ladawan Wongsriwong said her party doesn't know how many of their candidates are under investigation, but called for the commission "to give them fairness ... for the sake of constructive politics".