Workers walk past ASEAN members' flags next to the Aquatic centre in New Clark City, in Capas town on Nov 26, 2019.

MANILA - Philippine organisers of the South-east Asian Games fired back on Thursday (Nov 28) after days of critical coverage of the messy build-up to Saturday's opening ceremony.

Reports of unfinished construction, transport delays and complaints about food have surfaced as competitors have poured in for the regional competition.

In response, lawmakers and the spokesman of President Rodrigo Duterte have called for a probe into the preparations.

Alan Peter Cayetano, chairman of the organising committee, told journalists that "95 per cent" of the controversies to be investigated were in fact false media reports.

"I do know that during the digital age we need to report immediately, but that doesn't take out the responsibility to check if it's true or not," Cayetano said.

It comes just days after the committee apologised to arriving athletes, who said they were forced to wait for hours at the airport or were taken to the wrong hotel, vowing to "to better".

"Attempting to dictate how the media should report the news has no place in a democracy," the National Union of Journalists of the Philippines said. 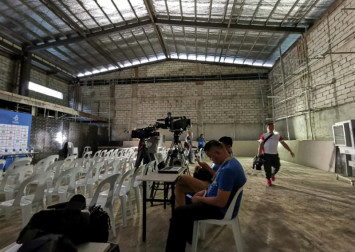 In one example cited by Cayetano, he denied claims by football players that they were served unhealthy fried fish - a common street food snack in Manila - insisting they were offered chicken sausage.

Meanwhile a picture shared by a news outlet purporting to be an unfinished stadium for the Games was taken down after it was found to have been taken in another country.

Thousands of athletes from 11 countries are taking part in a Games-record of 56 sports across dozens of venues in and around Manila, with some hours apart - a logistical challenge.

Duterte's spokesman Salvador Panelo also weighed in, urging the media Thursday to be "more prudent in their reporting and avoid publishing information without verification".

However, he urged the committee to "perform better", pointing towards "an array of criticisms". "The critics have a point," his statement said. "There is indeed something wrong with the preparations."

The president's spokesman said a probe will be launched once the Games are over looking into the "aberrations and irregularities".