Climbers wait to be rescued after an avalanche hit in Deurali, Nepal, on January 18, 2020.

A search and rescue operation for the four South Korean trekkers and three Nepali guides missing after being struck by an avalanche in northwest Nepal could take weeks due to bad weather, rescuers said on Sunday.

The area of Friday's disaster lies along the popular Annapurna trekking route, about 150km (90 miles) northwest of the capital Kathmandu.

Tourism Department official Mira Acharya said seven rescuers from the Trekking Agents' Association of Nepal had reached the site with rescue equipment but could not begin the search due to new avalanches and poor visibility from snow and rain. 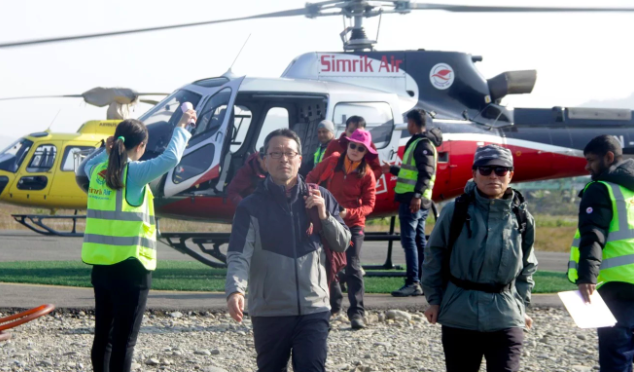 Tourists walk from a helicopter at Pokhara airport after a rescue operation from Mount Annapurna base camp, following an avalanche. PHOTO: AFP

"They are waiting for the weather to clear to start looking for the missing tourists," Acharya said, estimating the search operation could take 20 days.

One of the rescuers, Bijay K.C., said that even if the weather cleared it would take several weeks for the snow to melt, hampering the overall operation.

Mount Annapurna is the world's 10th highest mountain at 8,091 metres (26,545 feet). Its base camp is known for its spectacular beauty and thousands of trekkers go there every year.

Helicopters were sent out on Saturday to rescue about 200 people stranded around Annapurna and other nearby mountains after the incident.

Photos from the area shared on social media showed guest houses along the trekking route blanketed in a thick layer of white.

Six of the missing were part of the same expedition, while one Nepali porter was escorting a different group. The four foreigners were part of an 11-member team of South Korean nationals. Others from the team were safe. 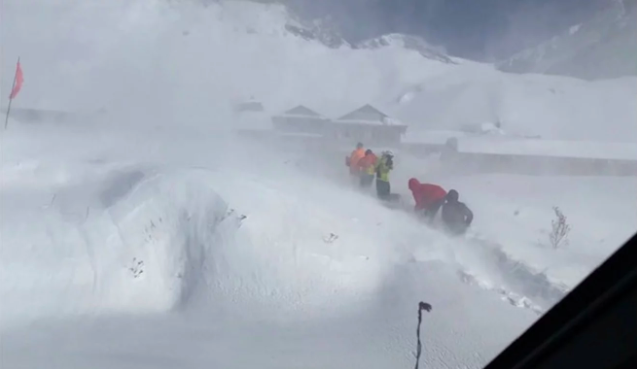 The incident comes as the annual trekking season in Nepal, home to eight of the world's 14 highest mountains including Mount Everest, is drawing to a close. 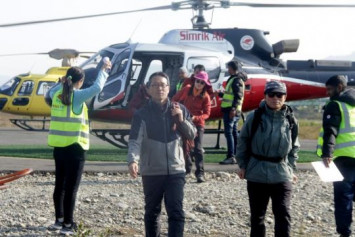 French trekker Herve Samonati, 60, arrived in Nepal for the Annapurna trek but said he was now heading to the neighbouring Mustang area, another popular trekking area.

"I wanted first to do the trek to the Annapurna base camp but decided not to go after the accident that happened recently because I find it too dangerous," he said.

Relatives of the missing Koreans have arrived in Kathmandu alongside several officials sent by Seoul to help with the emergency rescue efforts, Ang Dorjee Sherpa of the Korean Alpine Federation said on Sunday.

Education officials in Seoul said they were part of a team of volunteer teachers working with children in Nepal.

Annapurna is an avalanche-prone and technically difficult mountain range with a higher death rate than Everest, the world's highest peak.

Thousands of trekkers visit the route every year for its stunning views of the Himalayas.

A snowstorm killed about 40 people on the circuit in 2014, in one of the biggest trekking tragedies to hit Nepal.