Yanolja's gentrification of South Korean love hotels has brought the company a valuation of more than US$1 billion (S$1.3 billion) from investors keen to capitalise on the globalisation of a novel approach to short-stay accommodation, its chief executive said.

It aims to conduct an initial public offering (IPO) as early as next year.

"I can proudly say we transformed the industry," Kim said.

Yanolja's emergence coincides with a time of flux among hoteliers, as legislators are at loggerheads with market disrupters such as Airbnb - through which private homeowners can let rooms for short-term stay - while a government campaign to reduce working hours promises to free up more leisure time for short breaks.

Love hotels have occupied a peculiar space in the broader market, offering privacy for as little as a few hours at minimal cost for, for instance, young couples living with their parents. 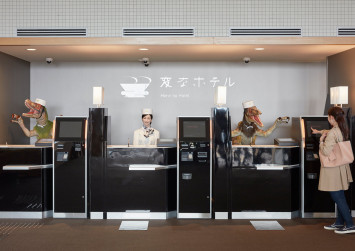 Popular association with extramarital affairs, prostitution and hidden cameras, however, has sullied their reputation, exacerbated by their often garish decor and low-key lighting.

"Previously, many people were not able to go to love hotels out of embarrassment," Kim said. "But we've drawn in guests even for travel. That's the biggest change."

The firm, which began as an online search portal for love hotels, also lists hotel, pension and guest house rooms on its website at prices ranging from 50,000 won (US$41.86) a night at budget hotel Ben-Hur to 200,000 won at five-star Hyatt.

"It is a unique example which breaks away from the traditional notion of motels," said Lee Hoon, a tourism professor at Hanyang University in Seoul. "But the domestic market is not big enough. Yanolja can survive only if it goes global and scales up."

Yanolja aims to expand in hotels in Southeast Asia where it invested US$15 million in ZEN Rooms last year, bringing it into competition with Indian budget hotel operator Oyo, backed by Airbnb and Japan's SoftBank Group.

"We are very keen to go global," Kim said.

Yanolja was founded in 2005 by former love hotel housekeeper and valet Lee Su-jin, whose search portal evolved into an advertising platform for love hotel operators seeking to replace customers lost after the 2004 passing of an anti-prostitution law.

A decade later, Yanolja claimed to be the first company to offer a reservation platform for mobile phones for its own and others' love hotels, a major shift in an industry which relied on walk-in customers.

The platform allowed it to expand its target guests to shoestring travellers from home and abroad, in a country where Airbnb-type options are limited to foreign guests. Listings later ballooned as hoteliers turned to Yanolja to fill rooms after a political dispute caused a drop in Chinese demand.

South Korea's online travel sales nearly doubled in five years through 2018 to US$21.8 billion, according to Euromonitor data. Sales by mobile made up nearly half of the total, the third-biggest proportion globally, Euromonitor said.

Yanolja's revenue nearly doubled to 188.5 billion won last year, from a year earlier, but the firm is still losing money on a consolidated basis, said CEO Kim. It aims to sell shares in an IPO by 2022 at the latest, he said.

Yanolja plans to increase offerings and raise efficiency through technology such as artificial intelligence and the internet of things, in a hotel industry Kim deemed conservative.

"The accommodation market is huge in South Korea and overseas, and there is enormous opportunity for change," said Kim, formerly of McKinsey & Co, 3M and Google. "This is just a beginning."