"The shooting is still happening right now, we don't know how many victims there are," said Markus Haluk, an executive of pro-independence United Liberation Movement for West Papua.

National police spokesman Dedi Prasetyo dismissed the media report of protesters being killed as "a provocation", adding that only information from the Papuan police can be trusted.

"We don't know yet how many victims because communication from there has been limited," he said.

Thousands of Papuans have been protesting over perceived ethnic discrimination since last week, with protesters torching a market, a jail and government offices. 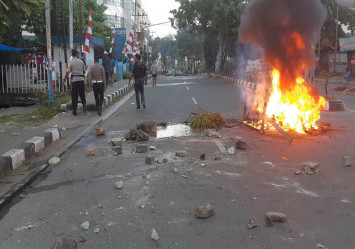 The demonstrations were triggered by a racist slur against Papuan students, who were hit by tear gas in their dormitory and detained in the city of Surabaya on Indonesia's main island of Java on August 17, but some protest rallies grew into a broader demand for an independence vote.

About 1,200 police officers have flown to the region which has a heavy military presence due to decades of separatist conflicts.

Jakarta has cut internet access in the region in the past week, to stop people sharing "provocative" messages that could trigger more violence, a step criticised by rights group and journalists, who said it had made reporting difficult.