Some Singaporeans staying on in Myanmar despite violence in the streets

Singaporean Joyann Lim, a digital marketer in Myanmar, photographed the rallies in the initial weeks but stopped when the violence escalated.

SINGAPORE - For the first time in her life, Singaporean Joyann Lim, 27, heard the sound of gunshots.

She had just had lunch in a teahouse near her office in Yangon last Tuesday (March 2) when a clash broke out in the same street between Myanmar security forces and protesters.

"I wasn't scared. In fact, I felt sad, but there is very little I can do to help," said the digital marketer, who has lived in Myanmar for four years.

She was ushered away by colleagues, but returned to the area after the crowd dispersed, to offer energy drinks to the local residents.

Demonstrations across the country in defiance of military rule - re-imposed when the army seized power from the democratically elected government on Feb 1 - have become increasingly violent in recent days, with fatalities.

More than 50 people have died and dozens have been injured in clashes that have taken place in cities like Yangon and Mandalay.

There are 500 Singaporeans registered with the Ministry of Foreign Affairs in Myanmar.

ALSO READ: Singaporeans in Myanmar should consider leaving as soon as they can: MFA

Amid the rising tensions and increasing number of civilian casualties, the ministry last Thursday urged Singaporeans to consider leaving the country as soon as they can. It advised those who choose to remain in Myanmar to stay indoors as far as possible and avoid unnecessary travel.

Since the start of February, there have been relief flights from Yangon to Singapore every Friday.

However, Ms Lim says she will be staying put until her visa expires in May.

She says the atmosphere on the streets has changed drastically, and she takes precautions on the rare occasions she leaves home, to avoid roads where there are crowds or security officers.

"It went from peaceful marches to armed forces firing shots at people," said Ms Lim, who had gone out to photograph the rallies in the initial weeks but stopped when the violence escalated.

Protests have been widespread since the coup last month, when the military, led by Senior General Min Aung Hlaing, detained State Counsellor Aung San Suu Kyi and members of her National League for Democracy party.

Some residential neighbourhoods have become the scene of violent clashes, including Sanchaung township, north of central Yangon.

Footage put up online of clashes there shows police firing tear gas and crowds running. The streets are littered with makeshift barricades of sandbags and barbed wire.

There have also been news reports of snipers stationed on rooftops there.

"I am very lucky that I have moved out of the vicinity," said Mr Kenneth Lim, 58, a senior executive at a real estate development firm who moved to another neighbourhood early last month.

Mr Lim, whose wife and daughter are in Singapore, said he will be staying in Yangon for now.

"I don't want to abandon ship unless there is really the need to; I have a responsibility to my boss and staff," he said.

Choosing to remain in Myanmar has a deeper meaning for one 35-year-old Singaporean, who gave her name only as Michelle.

Michelle was born in Myanmar and became a Singaporean in 2007 after moving to the Republic. She returned to Yangon in 2018 with her daughter because of her job in the food and beverage industry.

Read Also
'I will shoot whoever I see': Myanmar soldiers use TikTok to threaten protesters 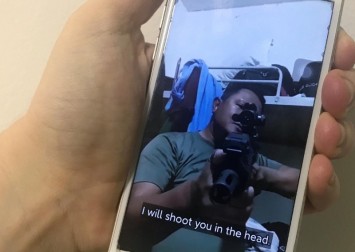 She has friends who have been stopped in public and had their phones searched by security officers. "They check if you have shared anything online or have photos that are incriminating. You could be arrested," said Michelle.

She does not intend to return to Singapore any time soon. "I will feel so guilty if I escape now. People are sacrificing their lives; how can I just leave now?"

Among the Singaporeans who have returned is student Ethan Swee, 17, who came back with his mother and younger brother two weeks ago. His father is still in Yangon for work commitments.

The trio finished their quarantine on Friday.

Like others who have left Myanmar, the international school student said safety was the biggest concern. "There were rumours that the airport was going to close, so my family thought to play it safe."