Sorgraw Petchyindee Academy Competes For Legacy – Inside And Outside The Ring 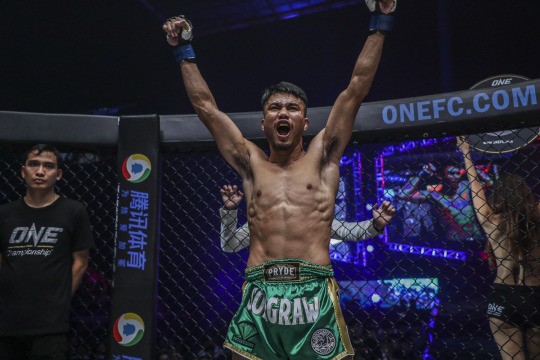 Thai star Sorgraw Petchyindee Academy returns to ONE Super Series action at ONE: HEART OF THE LION in Singapore on 9 November in a hotly-anticipated match-up against Italian kickboxing superstar Giorgio “The Doctor” Petrosyan.

It is the latest bout in the career of the 25-year-old who has used Muay Thai to lift himself out of poor circumstances to become a martial arts star.

Sorgraw grew up in the Northeastern region of Thailand and started his Muay Thai journey as a 10-year-old in elementary school, training in a makeshift ring at a local gym that was sponsored by a local police officer.

It was not long before he was competing.

“I remember being so excited for my first fight,” he recalls.

“As soon as it was over, I wanted to do it again.”

As a youngster, Sorgraw competed as frequently as he could, and amassed more than 100 bouts, competing in local fairs and other events.

Then, aged 15, he made his debut in Bangkok’s stadium scene and was eventually scouted by the Petchyindee Academy, where he has continued his Muay Thai development for the last three years.

“I’ll never forget where I came from and who helped me along the way, but it was Petchyindee that made me a champion,” he says.

Before his successes at Petchyindee, Sorgraw endured a tough time in his career, as the constant demands of weight cutting for bouts every few weeks started to take their toll.

Eventually, he took the decision to step away from the sport to refresh and recover.

“I wasn’t thinking about my future, but time allowed me to rededicate myself to the sport that has given me so much,” he says.

Now competing at the highest level and training six hours a day, six days a week, Sorgraw’s approach to his career is more professional as he focuses more on recovery after bouts.

It has left him feeling stronger as an athlete and more prepared to deliver his best inside the ring every time he competes.

In June, Sorgraw made his ONE Championship debut as part of its striking-only league, ONE Super Series. It was a landmark moment for the 25-year-old’s career.

“I always watched ONE Championship on TV, never thinking I would get an opportunity like that for myself,” he admits.

He made the most of his chance, earning a decision from Samy Sana after one of the most exciting striking battles in the organization so far.

Now he hopes to build a legacy for himself, inside and outside the ring. He wants to use the money earned from his Muay Thai endeavours to ordain as a monk at Prakhon Chai, which is something that would bring honour and respect to his family.

But before that, he wants to become a ONE Super Series World Champion, and faces one of the best pound-for-pound kickboxers in the world in his next bout.

“I am truly excited for the opportunity to share the cage with such a highly regarded fighter on such a big platform,” Sorgraw says.

It is a huge test, but one that Sorgraw is ready to meet head-on in his quest for greatness.