Workers spraying disinfectant in a market in the city of Daegu as part of preventive measures.

SEOUL - South Korea raised its infectious disease alert to its highest level yesterday as coronavirus cases in the country jumped to 602 and the death toll rose to six.

More than half of the new cases are linked to a church in the south-eastern city of Daegu after a 61-year-old woman known as Patient 31 who attended services there tested positive for the virus last week.

The woman had no recent record of overseas travel.

South Korean President Moon Jae-in said yesterday the government had raised the country's disease alert by one notch to the fourth and highest level to contain a surge in new cases.

The Korea Centres for Disease and Control and Prevention said the number of infections had jumped by 169. Of the total confirmed cases, more than 300 were linked to the Shincheonji Church of Jesus congregation in Daegu.

The escalation in the alert level allows the government to send extra resources to Daegu city and Cheongdo county, which were designated "special care zones" on Friday last week.

The alert level also enables the government to forcibly prevent public activities and order the temporary closure of schools, the Health Ministry said.

The ministry added that Prime Minister Chung Sye-kyun will take charge of policy decisions related to the outbreak, which is the first time the country's prime minister has intervened to take over from a minister in this way.

"The virus is more contagious and spreads quickly during the early stage... therefore pre-emptive measures are needed considering a possibility that the virus could develop into a nationwide spread from a community spread," Health Minister Park Neung-hoo told a news conference.

"We believe a week to 10 days will be crucial to determine the spread of the coronavirus." 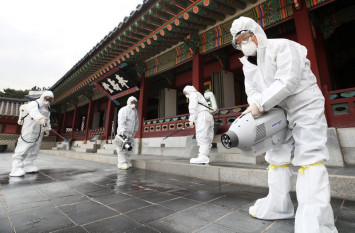 In a separate development, China's President Xi Jinping yesterday said the epidemic that has killed more than 2,400 people is the country's largest public health emergency since its founding in 1949.

It is vital to learn from "obvious shortcomings exposed" during China's response, he added at a meeting to coordinate the virus fight - a rare acknowledgement by a Chinese leader.

In comments reported by state broadcaster CCTV, Mr Xi said the epidemic "has the fastest transmission, widest range of infection and has been the most difficult to prevent and control".

Mr Xi's comments come as the number of virus infections passed 77,000 in China.

He said the epidemic will "inevitably have a large impact on the economy and society", but he stressed the effects will be "short-term" and controllable.

China will maintain a prudent monetary policy and roll out new policy steps in a timely way, he said, adding the government will also study and roll out phased tax cuts to help tide small firms over difficulties.