People wait in line to undergo the coronavirus disease (Covid-19) test at a temporary testing site set up at City Hall Plaza in Seoul, South Korea on Feb 10, 2022.

SEOUL - People infected with the Omicron coronavirus variant are nearly 75 per cent less likely to develop serious illness or die than those who contract the Delta variant, real world data released on Monday (Feb 21) by South Korea's health authorities showed.

A study by the Korea Disease Control and Prevention Agency (KDCA) of some 67,200 infections confirmed since December showed the Omicron variant's severity and death rates averaged 0.38 per cent and 0.18 per cent, respectively, compared with 1.4 per cent and 0.7 per cent for the Delta cases.

The KDCA classed severe cases as people who were hospitalised in intensive care units.

Around 56 per cent of 1,073 people who died over the past five weeks were either unvaccinated or had received only one dose, the study showed, with people aged 60 or older accounting for 94 per cent of deaths.

More than 86 per cent of South Korea's 52 million population have been double vaccinated and nearly 60 per cent have received a booster shot.

South Korea had kept cases and deaths relatively low thanks to widespread social distancing measures and aggressive testing and tracing. 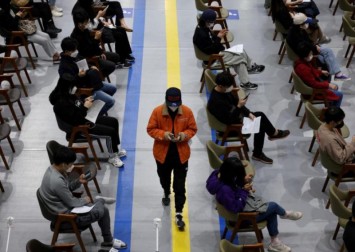 The Omicron variant has led to a surge in cases — daily new infections topped a record 100,000 last week — but authorities have pushed ahead with slightly easing social distancing rules amid the lower fatality rate and ahead of a presidential election next month.

Contact tracing and mandatory isolation for vaccinated people was scrapped in favour of self diagnosis and at-home treatment to free up medical resources. Among changes to strict curfews, restaurants will be open for an extra hour for groups of up to eight diners, up from six.

The long-running curfews have emerged as a political hot potato ahead of the election, with small business owners urging them to be lifted while some experts warn of likely strain on the medical system.

The KDCA said Omicron became the dominant variant in the third week of January and up to 90 per cent of new cases were Omicron by the first week of February.