SEOUL - A South Korean court on Tuesday (July 5) sentenced a man convicted of running one of the world's largest child pornography websites to a further two years in prison for concealing proceeds from the site, the Yonhap news agency reported.

The site’s operator, Son Jong-woo, had been released in July 2020 after serving an 18-month sentence for violating child protection and information laws.

The new charges were brought after Son's father filed a criminal complaint just months before his release, Yonhap reported. The father was not immediately available for comment.

Rulings in South Korea are not always immediately publicized and a spokeswoman for the court said she could not confirm Yonhap's report.

Tuesday's ruling found Son guilty of hiding about 400 million won ($305,000) that he had raised from the site, which was hosted on the so-called dark web, which is designed to be all-but-impossible to track online, Yonhap reported.

Son did not say anything as he entered the court, according to a Reuters witness, and his law firm declined to comment. He had admitted to the allegations and told the court he was sorry, Yonhap reported. 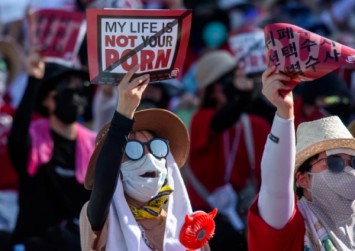 He was also convicted of using about 5.6 million won from the criminal proceeds for online gambling, according to the report.

In 2020, the Seoul High Court refused an extradition request for Son from the United States, saying it could hamper South Korean investigations into sexually exploitative content.

Officials from the United States, Britain and South Korea described the network as one of the largest child pornography operations they had encountered.

Son’s 18-month sentence contrasted with several 15-year sentences handed out to other people convicted in the United States in the case, and led to efforts in South Korea to impose stricter laws and tougher penalties for child pornography offences.