SEOUL - South Korea's president declared war on the coronavirus on Tuesday, ordering additional hospital beds and more face masks to be made available as the number of cases rose by 974 in the worst epidemic of any nation outside China.

President Moon Jae-in apologised for shortages of face masks and promised support for virus-hit small businesses in Asia's fourth-biggest economy, which has now reported 5,186 cases of the flu-like disease and 34 deaths.

"The entire country has entered war against the infectious disease as the crisis in Daegu and Gyeongbuk province has reached the highest point," he told a cabinet meeting, referring to the hardest-hit parts of the country.

"I am very sorry to the people that we are not able to supply masks swiftly and sufficiently, and have caused inconvenience."

The virus which originated in China late last year began to spread rapidly in South Korea after it entered the congregation of a Christian sect in Daegu city, the Shincheonji Church of Jesus.

Daegu's mayor told reporters he had asked the president for 3,000 more hospital rooms to cope with the rising number of the coronavirus patients.

The leader of the sect and self-proclaimed messiah Lee Man-hee tested negative for the virus on Monday, having been threatened with arrest unless he agreed to be examined.

He had earlier apologised for the sect's role in spreading the virus and called the epidemic a "great calamity".

The church and Lee personally have come under intense scrutiny and growing public anger, and some politicians have reported them for prosecution.

President Moon ordered masks to be stockpiled as a strategic item so suppliers can increase output without fear of producing surplus. 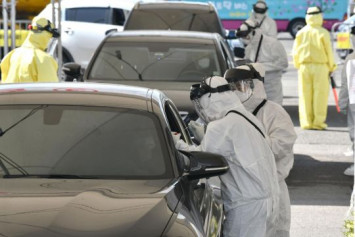 There have been long queues outside retail stores and online suppliers have been selling out as soon as stock arrives, even though the World Health Organisation says healthy people only need to wear masks if they are caring for someone who is sick.

Lee Ji-eun, a 34-year-old doctor in Seoul, said her daily routine began with surfing the internet to try to find masks for her family.

"It is totally a lottery. I click 'buy' like crazy every morning, but I only succeeded in purchasing a few last week," she said. "There aren't enough even for doctors when treating patients."

In Daegu, people on Tuesday were lining up at pharmacies to buy masks distributed by the government. A man was caught lining up to buy a mask after testing positive for the virus, a police official told Reuters.