SEOUL - South Korean prosecutors said on Wednesday (April 11) that former president Park Geun Hye had unfairly dodged some bribery charges in her trial and they appealed against her jailing for only 24 years, after they had demanded a 30-year sentence, media reported.

Park was sentenced last Friday at the conclusion of the country's most momentous graft trial in years, which exposed webs of corruption between political leaders and some of its biggest conglomerates.

"The Seoul Central District Prosecutors' Office said it finds part of the ruling clearing Park of some of the bribery charges against her unfair," the Yonhap news agency reported.

Park, the daughter of a former military dictator who became South Korea's first democratically elected leader in 2012, had pleaded not guilty. 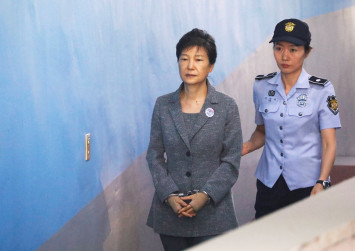 She was fined 18 billion won (S$22.09 million) after she was found guilty on 16 counts, including bribery and abuse of power, in connection with the scandal that saw a court oust her from office in March last year.

Prosecutors had charged her on 18 counts and called for a 118.5 billion won fine, in addition to a 30-year jail term, but the court acquitted her of two of the charges.

The court ruled that Park was guilty of colluding with a friend, Choi Soon Sil, to receive about 7 billion won each from Lotte Group, a retail giant, and Samsung, the world's biggest maker of smartphones and semiconductors, while demanding 8.9 billion won from SK, an energy conglomerate.

One of Park's state-appointed lawyers suggested after the trial that she could appeal, but she has yet to do so.

In South Korea, an appeal must be filed within a week of a court verdict.