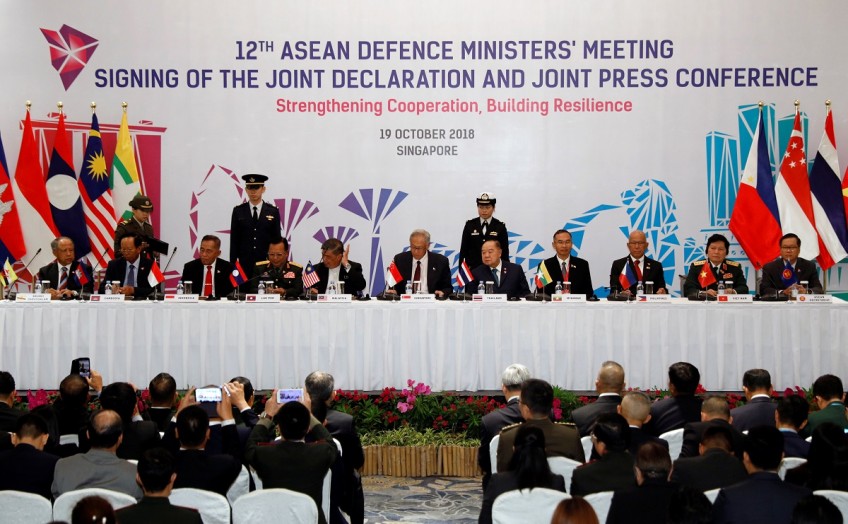 SINGAPORE - Southeast Asian countries agreed on Friday to guidelines to manage unexpected encounters between their military aircraft, with host Singapore calling the pact a world first and saying they would encourage their international partners to join.

The agreement, signed by defence ministers of the 10-member Association of Southeast Asian Nations (ASEAN) at a conference in Singapore, includes a region-wide agreement on the exchange of information on terrorism threats.

"I am happy to announce the first multilateral guidelines for air encounters between military aircraft have been adopted," Singapore's defence minister, Ng Eng Hen, told a news conference.

"This is a significant achievement."

The ASEAN ministers are due to meet their partners on Saturday and Eng said they would "seek their agreement" on the guidelines.

The framework for the guidelines said an agreement was needed because rising growth and prosperity in Asia had led to an increase in maritime and air traffic in the region.

The United States and China in 2015 signed a bilateral agreement on a military hotline and rules of behaviour to govern air-to-air encounters.

But even with the existing guidelines, tensions remain, especially in the hotly contested South China Sea.

This month, China expressed anger after a US Navy destroyer sailed near islands claimed by China, saying it resolutely opposed an operation that it called a threat to its sovereignty.

"In a way they are like seatbelts, not completely protected, but at least they provide some protection," Eng said when asked if the sea guidelines were working.

In August, Southeast Asian nations and China adopted a negotiating framework for a broader code of conduct in the South China Sea.

That framework seeks to advance a 2002 Declaration of Conduct of Parties in the South China Sea, which has mostly been ignored by claimant states, particularly China, which has built seven islands in disputed waters, three of which are equipped with runways, surface-to-air missiles and radars.

All 10 ASEAN states also agreed to adopt the "our eyes" initiative - initially launched by six member states in January - as a platform to exchange information on "terrorism, radicalism, and violent extremism, and other non-traditional threats".

They also agreed to set up a "virtual" network of chemical, biological and radiological defence experts to "better share best practices and make quick contact during crises".