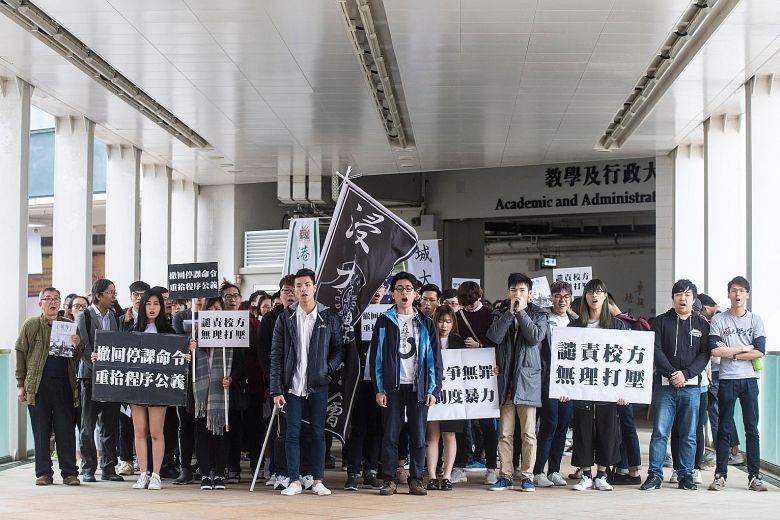 The first language of Hong Kong is Cantonese and proposals from education chiefs to put more emphasis on learning Mandarin have tapped into fears about the "mainlandisation" of the semi-autonomous city's culture and identity.

Anger has mounted since two students from Baptist University were suspended this week for confronting and swearing at staff over the requirement to pass an exam in Mandarin before being able to graduate.

Their suspension comes as concern grows that academic freedoms are being squeezed by Beijing, and that freedom of speech as a whole is under threat.

Protesters from a range of universities gathered Friday afternoon in a public square at Baptist to support suspended pair Andrew Chan and Lau Tsz-kei, chanting: "Shame on student suppression!"

"Never mind if we have been suspended, but what if it happens to you all?" an emotional Chan told the crowd, wiping away tears.

Lau, who is president of the Baptist student union, admitted they need to reflect on their actions towards staff but said he was "very disappointed" in the university chief's decision to suspend them.

"I never thought he would do this," Lau said.

Lau and Chan were among 30 students who confronted staff in an eight-hour stand-off at the university's language centre last Friday after it was revealed that 70 per cent of those who had taken a Mandarin proficiency test had failed.

The test was introduced last year for students seeking exemption from a compulsory course in the language.

Students have highlighted the complexity of the proficiency test questions, and say the marking system was not transparent.

Supporters of compulsory testing say Mandarin skills boost students' career prospects, but many feel they should have the right to choose their own subjects.

Hong Kong enjoys freedoms unseen on the mainland since being handed back to China by Britain in 1997, under a "one country, two systems" deal.

But there are rising concerns that those liberties are under threat.

The rallies, which failed to win concessions, were spearheaded by university student leaders and were an unprecedented rebuke to Beijing.

Since then, appointments of pro-establishment figures to senior university positions have riled students and some staff.

There has also been anger over university officials' opposition to the expression of pro-independence views on campuses.

University chiefs penned a joint statement in September saying freedom of expression was "not absolute" after pro-independence banners popped up at the beginning of term.

The emergence of activists calling for Hong Kong to split from the mainland has infuriated Beijing, with President Xi Jinping saying he will not tolerate challenges to Chinese sovereignty.