Myanmar's Aung San Suu Kyi on Thursday robustly defended the jailing of two Reuters journalists who were reporting on the Rohingya crisis, as she hit back at global criticism of a trial widely seen as an attempt to muzzle the free press.

The country's de facto leader acknowledged that the brutal crackdown on the Muslim minority -- which the United Nations has cast as "genocide" -- could have been "handled better", but insisted the two reporters had been treated fairly.

"They were not jailed because they were journalists" but because "the court has decided that they had broken the Official Secrets Act", she said.

Wa Lone, 32, and Kyaw Soe Oo, 28, were each imprisoned for seven years last week for breaching the country's hardline Official Secrets Act while reporting on atrocities committed during the military crackdown in Rakhine state.

Suu Kyi, once garlanded as a global rights champion, has come under intense pressure to use her moral force inside Myanmar to defend the pair.

Challenging critics of the verdict -- including the UN, rights groups who once lionised her, and the US Vice President -- to "point out" where there has been a miscarriage of justice, Suu Kyi said the case upheld the rule of law.

"The case was held in open court... I don't think anybody has bothered to read the summary of the judge," she said during a discussion at the World Economic Forum, adding the pair still had the right to appeal. 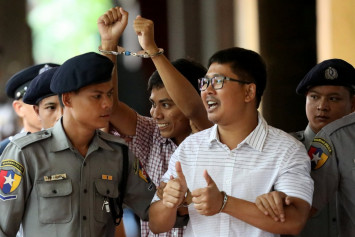 The ferocity of that crackdown has thrust Myanmar into a firestorm of criticism as Western goodwill evaporates towards a country ruled by a ruthless junta until 2015.

A UN fact-finding panel has called for Myanmar army chief Min Aung Hlaing and several other top generals to be prosecuted for genocide.

The International Criminal Court has said it has jurisdiction to open an investigation, even though Myanmar is not a member of the tribunal.

Suu Kyi, who has bristled at foreign criticism of her country, on Thursday softened her defence of the crackdown against "terrorists" from the Muslim minority.

"There are of course ways (in) which, in hindsight, the situation could have been handled better," she said.

But she also appeared to turn responsibility onto neighbouring Bangladesh for failing to start the repatriation of the nearly one million-strong Rohingya refugee community to Myanmar.

Bangladesh "was not ready" to start repatriation of the Rohingya in January as agreed under a deal between the two countries, she said.

Yet Myanmar does not want its Rohingya, denying them citizenship while the Buddhist-majority public falsely label them "Bengali" interlopers.

Rohingya refugees refuse to return to Myanmar without guarantees of safety, restitution for lost lands and citizenship.

The jailing of the Reuters reporters has sent a chill through Myanmar's nascent media scene.

The pair has denied the charges, insisting they were set up while exposing the extrajudicial killing of 10 Rohingya Muslims in the village of Inn Din in September last year.

This week, the UN rights office accused Myanmar of "waging a campaign against journalists".

It decried the use of the courts and the law by the "government and military in what constitutes a political campaign against independent journalism".