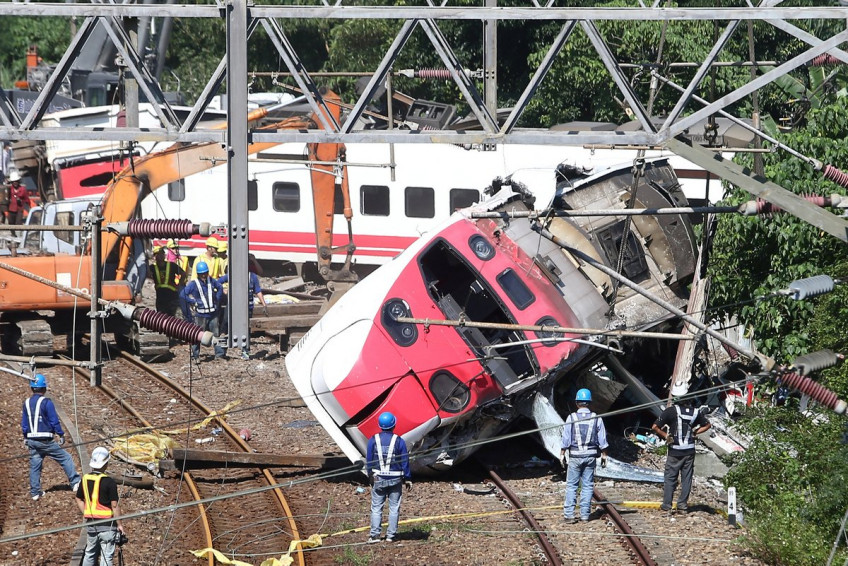 The driver of the train which derailed in north-eastern Taiwan on Sunday with a loss of at least 18 lives admitted he shut down the train's automatic protection system before the accident, a court said on Tuesday (Oct 23).

The driver, You Zhen-zhong, then steered the express train manually but neglected to keep it from going too fast, the Yilan District Court said in a statement published on its website.

"The driver switched off the train's Automatic Train Protection (ATP) and began steering it manually when it was passing through Daxi in Yilan because the train had reacted abnormally during acceleration," the court said in the statement.

"But he failed to ensure that the train conform to speed regulations when entering stations and going through curves, and even accelerated it to speeds of 140kmh, causing it to derail at 4.48pm at Xinma station and leading to the deaths of 18 people and more than 180 to be injured."

The statement was issued shortly after the court released You, 48, on bail Tuesday morning for NT$500,000 (S$22,300) but banned him from leaving the island.

The driver, who was injured in Sunday's accident and appeared in court in a wheelchair, had been questioned overnight by prosecutors over suspected professional negligence.

Initial investigations had pointed to speeding as causing the train, which was travelling from Taipei to the coastal county of Taitung with 366 passengers, to careen off the tracks near Yilan's Xinma station on Sunday afternoon.

Eight of the 18 who died were members of the same family returning home from a wedding, local media said.

It was the worst rail accident in Taiwan since 1991 when 30 passengers were killed and 112 injured after two trains collided in the western Miaoli county.

Minister without Portfolio Wu Tze-cheng said on Monday the train was travelling at 140kmh when the train was negotiating a curve which had a speed limit of just 75kmh.

The train data recorder had been sent to prosecutors to be examined.

Speaking to reporters outside parliament on Tuesday morning, Premier Lai Ching-te apologised to the people over the accident and promised that rail services on the popular route which have been suspended since the mishap will be resumed in three days' time.

The authorities also said NT$5.4 million (S$240,845) is to be paid to the families of those who were killed, while those who were injured will also be compensated.

The head of Taiwan Railways Administration, Lu Chieh-shen, had offered to resign but that was not accepted by the transport minister, the railway authority said.