TAIPEI - A popular Taiwanese YouTuber who specialises in flirting tutorials has found his access to China go up in smoke after a humorous video of him interviewing the island's president went viral.

The incident illustrates the precarious position many Taiwanese celebrities find themselves in if they stray into political topics that anger communist authorities in China.

"Potter King", an Internet celebrity with a significant following on both sides of the Taiwan Strait, released a video over the weekend in which he tried out some of his pick-up lines on President Tsai Ing-wen, who is seeking re-election in January and is loathed by Beijing.

The video quickly went viral, racking up more than three million views on Facebook and 500,000 views on YouTube.

But the footage led to a backlash with the Chinese web company that distributes Potter King's videos on the mainland because he dared to address Taiwan's leader as "president".

YouTube is banned on the mainland but many celebrities and overseas social media channels sign deals with Chinese companies to host their content on platforms that are allowed beyond the Great Firewall.

On Sunday (Dec 15), Potter King - real name Chen Chia-chin - posted chat logs between him and his Chinese distributor Papitube in which a representative demanded he take down the interview with Ms Tsai.

Their main complaint was references to Ms Tsai as president.

"If we can't even address the head of state of my country as 'president', we do not think we want this business," Potter King wrote on Facebook, calling the request "absurd". 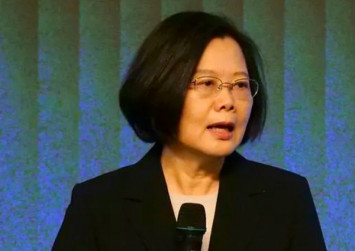 "The monthly loss will be quite significant, but we can't bring ourselves to kneel down," he added.

Papitube released a statement confirming the contract had been terminated. It described Potter King's language and actions as "inappropriate" and added it "strongly rebukes any actions which undermines the nation's (China) dignity".

Taiwan has been a de facto sovereign nation since the end of a civil war in 1949, but China still views the island as its territory and has vowed to reunite it, by force if necessary.

Beijing has ramped up diplomatic and economic pressure on Taiwan since Tsai took office in 2016 because her party refuses to recognise the idea that the island is part of "one China".

In recent years, international brands and Taiwanese companies have routinely found themselves bowing to Beijing's stance on Taiwan - a much smaller market compared to the lucrative mainland.

A growing list of international firms, including luxury brands, airlines and hotels, have been pushed to apologise to Beijing or change Taiwan's classification on their websites to "Taiwan, China" or "Chinese Taipei".

Potter King's response is a rare example of a celebrity or brand pushing back against self-censorship and forgoing access to the Chinese market.

But Beijing's use of diplomatic and economic cudgels may be backfiring with Taiwanese voters - Ms Tsai is currently leading in the polls by a wide margin.