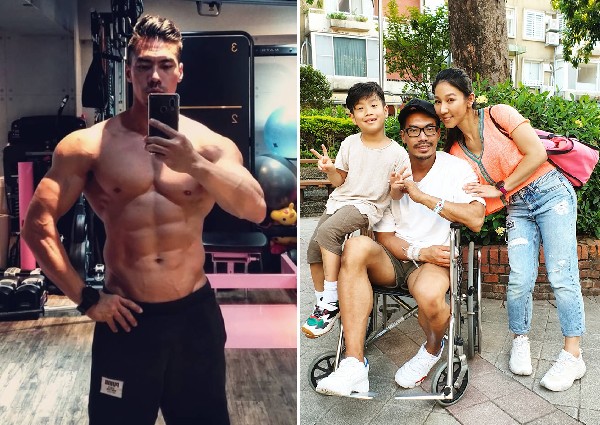 JZ Woo is the embodiment of #fitnessgoals — he's an award-winning bodybuilder, owns a gym, not to mention he's insanely ripped. But the fitness guru was hit with a reality check when he recently suffered a stroke at 37.

JZ, also known as Muscle Daddy among fans, had dropped off his son at school last week and was taking a nap when his wife, Melody Wan, realised that something was wrong.

Melody, a fellow bodybuilder and fitness guru, immediately rushed him to the hospital where he was diagnosed with a stroke that had been caused by a cerebral embolism — a blood vessel in his brain was blocked by a clot.

The stroke affected the part of the brain that controls the movements on the right side of his body but according to his wife, JZ is on a swift road to recovery.

In the meantime, she is picking up the slack and taking over his classes at JZ Fitness, the gym that they co-own.

She reflected on the ordeal in an emotional Facebook post on Sept 13, writing, "In a moment, my life was turned upside down. It was so hard to accept that my husband, who had accompanied me on a holiday the previous week, was on a hospital bed fighting death."

How did a bodybuilder who was in the pink of health end up suffering from a stroke?

Melody explained that his cholesterol levels, blood pressure, and visceral fat levels were all normal. However, he had a family history of excessive blood clotting.

Several of his relatives had passed away from strokes. In fact, one of them had only been in their 20s.

She reflected on the couple's lifestyle, saying, "We didn't think about all that because we thought we were active, young and fit, and our medical check-ups didn't show any problems."

"We would often work late and sacrifice sleep… We would sleep at 3am, wake up at 6am and take short naps during the day. In total, we slept less than six hours a day," she added.

In the wake of JZ's stroke, the entire family is readjusting their habits. According to Melody, they now go to bed by 9pm or 10pm every night.

The health scare has also caused the couple to appreciate each other more, she says.

"The other day I was in Kaohsiung teaching when I suddenly got a text message from him… It was the best gift after eight years of marriage."

"I realised, I'm so happy to be able to text my husband. To be able to hug him while chatting with him is such a huge blessing."