Frustrated by rowdy students, a teacher in Taiwan flipped several tables as she experienced a meltdown after the class ended.

Her emotional outburst was captured in a TikTok video which recently made the rounds on Taiwanese media.

According to United Daily News, the incident took place on Sept 13 in a high school in Taichung.

The teacher, who's in her 30s, was seen walking around the classroom, taking her anger out on several desks and chairs as stunned students watched on.

She also let out some angry words but they were muffled by her face mask.

A male student was seen righting a fallen table and picking up the scattered textbooks.

Speaking to Taiwanese media, a spokesperson from the Education Bureau said the teacher had flipped over six tables that day, injuring a student's foot in the process.

Her actions surprised many school staff, for she was known to be a dedicated teacher who had high expectations of her students.

Investigations revealed that the teacher got frustrated as her students were inattentive in class after returning from a semester of home-based learning.

The teacher apologised and paid for the injured student's medical bills, so the school decided to let her off with a warning on her future conduct. 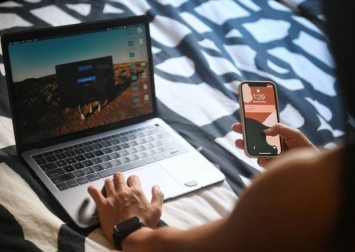 This is one of the latest incidents casting a spotlight on teachers and their well-being during the Covid-19 pandemic.

A recent nationwide survey conducted by the Singapore Counselling Centre with 1,325 teachers found that over 90 per cent experienced at least one behavioural, psychological or physical symptom.

The main workplace issues they faced include a lack of work-life balance, excessive workload and students' behaviour.