Civilians prepare to board a plane during an evacuation at Hamid Karzai International Airport, Kabul, Afghanistan, on Aug 18, 2021.

KABUL - The Taleban expect foreign evacuations from Kabul to be completed by the end of the month, the Islamist group's main spokesman said on Tuesday (Aug 24), urging Afghans to stay to help rebuild their country.

Zabihullah Mujahid said the movement had not agreed to an extension of an Aug 31 deadline which he said had been agreed with the United States to pull out of Afghanistan, and he said the group wanted all evacuations to end by that date.

"The extension was unilateral by the side of the United States," he said, apparently referring to a comment by Biden last week that US troops may stay beyond Aug 31.

"It was a violation of the agreement. We want them to evacuate all foreign nationals by Aug 31," Mujahid said, according to his translator. "And we are not in favour of allowing Afghans to leave."

A US administration official said on Tuesday that Biden had accepted a Pentagon recommendation to remove US troops from Afghanistan by the end of the month, but that the decision was contingent on whether the Taleban cooperates in helping the United States complete evacuations.

It was not clear whether the Taleban spokesman's comment indicated that there would be a formal ban on Afghans leaving the country. 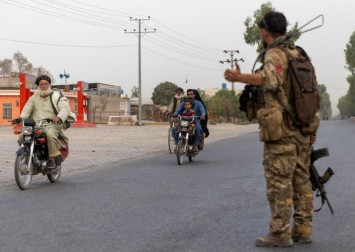 He said crowds thronging outside the airport could go home and their security would be guaranteed and he called on the United States not to encourage educated and trained Afghans to leave their country.

"We need their expertise," he said, adding that once security was re-established, women would be able to return to work as normal.

He also denied reports that Taleban patrols were conducting house to house searches to find targets for reprisals, saying: "We have forgotten everything in the past."

Mujahid repeated that the Taleban wanted good diplomatic relations with other countries and wanted foreign embassies to remain open.

He also said the movement wanted dialogue to resolve the situation in the province of Panjshir, where forces loyal to Ahmad Massoud, son of the former anti-Soviet commander Ahmad Shah Massoud, had gathered.