Thai King writes messages of love for nation amid protests

Thailand's King Maha Vajiralongkorn and Queen Suthida write messages on paper as they greet royalists at an airport in Udon Thani province.

BANGKOK - Thailand's King Maha Vajiralongkorn wrote messages of national unity and love on Tuesday (Nov 10) during a visit to the north-east of the country two days after protesters sent him a letter demanding royal reforms that would curb his powers.

The Royal Palace has made no comment on months of protests so any communications from the King are watched carefully in the South-east Asian country.

"We all love and care for each other. Take care of the country, help each other protect our country with goodness for prosperity and protect Thainess," the King wrote in a message to the governor of Udon Thani province.

On a picture of himself and the Queen that was brought by one of the crowd of well-wishers, the King wrote: "Love the nation, love the people, cherish Thainess, real happiness."

Thousands of protesters marched to the Grand Palace in Bangkok on Sunday (Nov 8), getting within a few dozen metres of the walls despite a police blockade and a burst of water cannon, to send a message to the King.

Shattering a longstanding taboo on criticising the monarchy, they have demanded the departure of former junta leader Prayuth Chan-ocha as prime minister, a new constitution and reforms that would reduce his powers. 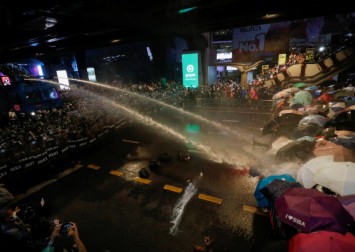 "When the King truly cherishes democracy, all people will find happiness," the protesters said.

Last week, the King made his first comments on the protesters. In brief remarks, he said "we love them all the same" and described Thailand as a land of compromise.

Prayuth has said he will not resign, rejecting protesters' accusations that he engineered last year's election to keep power that he seized in a 2014 coup.