BANGKOK - Thai King Maha Vajiralongkorn's praise for a man who held up a royal portrait at a protest site in Bangkok has drawn controversy in Thailand, winning acclaim from monarchists and scorn from protesters.

The King has not made any public comment on more than three months of protests, which have increasingly targeted the monarchy as well as the government.

But in video recorded on Friday evening (Oct 23) as the King greeted well-wishers outside the Grand Palace, he is heard praising a monarchist who is introduced by Queen Suthida as the man who held up the royal portrait while others were protesting.

The Royal Palace made no comment, as it has not since the start of anti-government protests in July that have increasingly targeted the monarchy as well. Government spokesman Anucha Burapachaisri declined to comment.

The video was posted on the royalist's Facebook page along with several other videos of the event and pictures of him from Oct 20 holding the portrait.

"Their majesties recognised me. This is the highest point of my life," wrote the man, Mr Thitiwat Tanagaroon.

Reuters was unable to independently verify the authenticity of the video. Several other people at the event recorded the encounter and posted videos online, but the King's words were not clear amid the chanting. 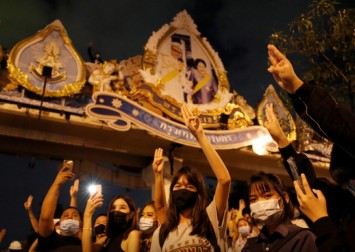 "Just seeing this picture, we are very touched," royalist leader Warong Dechgitvigrom posted. "This is the Thai way and Thai society of caring, supporting and protecting. Today it's considered that his institution has adapted to be very close to the people. That made the greatest impression."

But also among the top trending hashtags on Twitter in Thailand, tweeted well over 500,000 times, was #23OctEyesOpened - used by protesters and their supporters saying the Palace had now made its position clear.

The hashtag #VeryBraveVeryGoodThankYou was also widely used - alongside sarcastic comments.

"Very brave, very brave, very good for such a clear expression," read a comment from protest leader Tattep Ruangprapaikitseree. He has put less emphasis than others on calls for royal reform.

Another protest leader, Mr Piyarat Chongthep, commented: "The King has not been above political problems but always sits at the heart of the problems."

Protesters seek the removal of Prime Minister Prayut Chan-o-cha, a former junta leader they accuse of engineering an election last year to keep power. He denies the accusation.

The protests also seek changes to the Constitution and to reduce the powers of the monarchy, which they say has helped enable decades of military domination.

Under Thailand's Constitution, the monarchy is "enthroned in a position of revered worship" but in principle it does not engage in politics - a point that the King himself underlined during elections last year.

"I interpret it as signalling that the King acknowledges the challenge to his authority by the protests, but will not back down," he said.