Military top brass yesterday issued a strong call for a government of "good people" in accordance with the late King Bhumibol Adulyadej's exhortation, while the Armed Forces Academies Preparatory School Alumni Foundation stripped former prime minister Thaksin Shinawatra of an award due to his alleged disrespect for the monarchy.

The Armed Forces have nothing to do with the formation of a new government after the March 24 election and the matter was up to the political parties, Pornpipat said. "No matter which parties win the race to form the government, the Armed Forces have to serve in accordance with the policy and direction set by that government," he said. "Our duty is to protect national sovereignty and maintain peace and stability."

"However, our major concern is how to bring good people to govern the country in accordance with King Rama IX's supreme philosophy," Pornpipat said, without elaborating on who might be "good people". 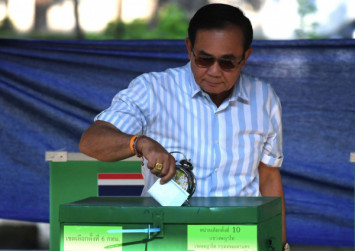 The commander's statement was in line with the Royal Household's statement issued on the eve of election. The statement referred to the late King Rama IX's speech in December 1969 when the then monarch said: "In national administration, there are both good and bad people. Nobody can make everybody good. To maintain peace in the country, we cannot make everybody good, but we can support good people. We must let good people rule and control bad people, so they have no power."

Asked for the Armed Forces' reaction if General Prayut Chan-o-cha, who staged the coup to topple an elected government in 2014, failed to retain his power, Pornpipat said the Armed Forces can serve every kind of government and it not matter who the premier was.

Asked if the pre-cadet school foundation's decision to strip Thaksin's honour was connected with his daughter's wedding ceremony, which was attended by Princess Ubolratana, Pornpipat said he did not want to link the decision with any political matter.

The pro-Shinawatra Thai Raksa Chart Party was dissolved after it proposed Princess Ubolratana, who relinquished her royal status in 1972, as its prime minister candidate. Thaksin told BBC Thai service recently that he had known the princess for more than 30 years. The nomination of her name for PM candidate was a result of her own good intention to work for the country. He did not want to drag the monarchy into politics.