Nirun Wongwanich, 52, a monkey trainer, sits next to a monkey during a training session at a monkey school for coconut harvest in Surat Thani province, Thailand, on July 10, 2020.

BANGKOK - A monkey trainer in southern Thailand said on Saturday that few monkeys are involved in harvesting coconuts for export, disputing an activist report which has caused several British supermarkets to ban coconut products from the country.

Nirun Wongwanich, 52, who trains monkeys to fetch coconuts at a “monkey school” in the province of Surat Thani, said most coconuts used for export are harvested by humans with poles.

Only a few farms in the south use monkeys for taller coconut trees, he said, denying accusations of cruelty.

“There is no truth to that. I have been with monkeys for over 30 years ... I have a bond, a relationship with them,” Nirun told Reuters, adding that he trains six to seven monkeys a year.

Earlier this month several British retailers pulled Thai coconut products from their shelves after a report by People for Ethical Treatment of Animals (PETA) alleged that coconuts in Thailand are picked by abused monkeys.

“Glad Waitrose, Co-op, Boots & Ocado have vowed not to sell products that use monkey labour, while Morrisons has already removed these from its stores,” she tweeted.

PETA has said it believes virtually all coconuts from Thailand are picked by monkeys.

However, Thailand’s government has denied the PETA report, saying the use of monkey labour is “almost non-existent”.

“Even all the monkeys in the entire forest won’t be enough for the industry,” Mananya said. 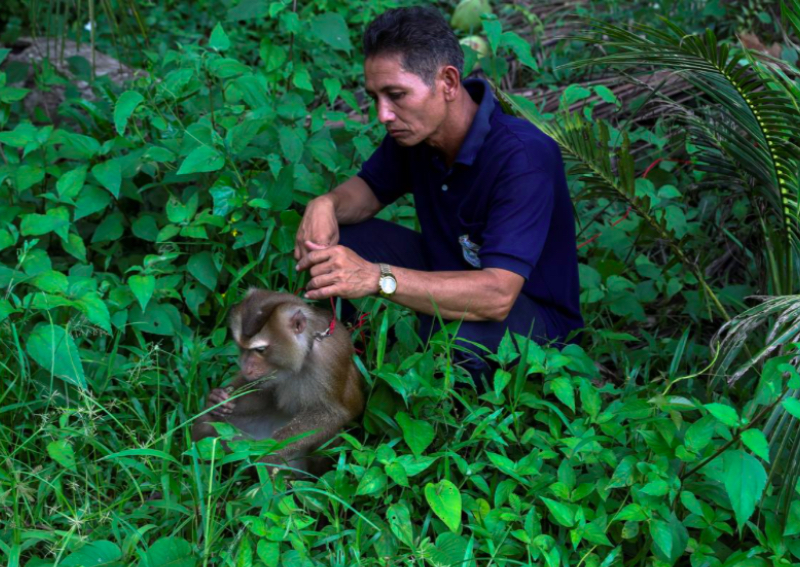 A PETA official on Saturday rejected the Thai arguments.

“The industry’s efforts to side-track the issue with a count of the number of farms and monkeys ... only shows the world they are trying to do more of the same – keep monkeys in chains,” PETA Asia official Nirali Shah said.