Most of us know of Robin Hood and his mission to steal from the rich to give to the poor.

While Robin Hood was often clothed in folklore, this man decided to put a twist to your everyday Robin Hood story.

A 23-year-old man who wore only underpants while breaking into Banana IT stores in Bangkok, some nine of them, to steal handphones was recently caught on Monday (July 4).

According to Bangkok Post, CCTV footage caught the male burglar, Jeh-isma-ae Hama, entering a Banana IT shop in Muang district of Nakhon Nayok at 3am the day before his arrest.

The recordings showed the dubbed 'Robin Hood' allegedly stealing 128 items - obviously with most being handphones - worth about 1.9 million baht (S$74,000) from one shop.

And he did all of this while dressed in only undergarments.

Wanted on four warrants for more than six months, the Thai Royal Police was finally able to apprehend the man at a rented condominium room in the Bang Kapi district of Bangkok today, reported The Thaiger.

The police found a total of 89 handphones in rented rooms found in the district.

"The man was about to leave for Narathiwat with the stolen phones when he was caught," said Pol Maj Gen Theeradet Thamsuthee, investigation chief for Provincial Police Region 2.

Read Also
'I already said sorry what': Man's reply after he was caught stealing bicycle at Paya Lebar 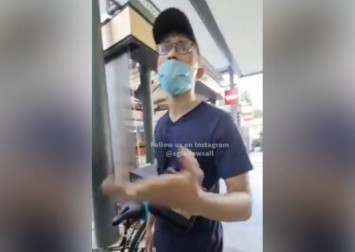 Mr 'Robin Hood' has already pleaded guilty to his crimes.

Thai news platform The Thaiger reported that he told the police: "I only steal from Banana stores because I like bananas and I like the colour yellow. I like to take my clothes off and I like to only wear underpants. It gives me a feeling of confidence and I feel like myself."

He also added that he chose handphone outlets from online maps and that he stole handphones as he did not have one when he was younger, unlike his friends.

Like Robin Hood, Jeh-isma-ae Hama steals these phones and later distributes the loot to homeless people at Hua Lamphong railway station, Sanam Luang ground in Bangkok and in Narathiwat.

He revealed that he was also homeless in the past.