BANGKOK - Speakers at a Thai anti-government protest demanded reforms to the monarchy of King Maha Vajiralongkorn on Monday (Aug 3), calling for its powers to be curbed in unusually frank public comments.

Defaming the monarchy is punishable by up to 15 years in prison under Thailand's 'lese majeste' laws. Police did not stop the six speakers, but said that any suspected offences would be investigated.

Many of the 200 protesters were dressed like the fictional wizard Harry Potter and other characters in what they said was a reference to vanquishing injustices under the military-backed government.

Lawyer Anon Nampa, 34, accused the palace of taking on increasing powers that undermined democracy and of inaction in the face of attacks on opponents of the government of Prime Minister Prayuth Chan-ocha, a former junta leader.

After the king took the throne in 2016, the palace required revisions to a new constitution that gave him greater emergency powers. He has since taken personal control over some army units and palace assets worth tens of billions of dollars.

Meanwhile, some Thai activists complain of harassment by authorities, saying that at least nine opposition figures living abroad have disappeared. Two were later found dead. Reuters has not independently confirmed what happened to these opposition figures. 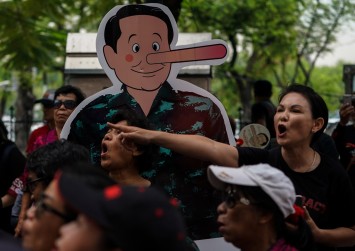 "Talking about this is not an act to topple the monarchy, but to allow the monarchy to exist in Thai society in the right way and legitimately under a democratic and a constitutional monarchy," Anon told the group of around 200 at Bangkok's Democracy Monument.

Two student groups then read out demands that started with:"Cancelling and reforming the laws that expand the power of the monarch and that could impinge on democracy where the king is the head of state."

The Royal Palace did not answer phone calls on Monday seeking comment on the criticism.

Deputy government spokeswoman Ratchada Thanadirek said it was up to police whether to act against the protesters "The government wants the young protesters to observe the laws so that they can continue to exercise their rights to make their demands and the country can stay peaceful," she said.

The students from Mahanakorn and Kaset universities also called on the authorities to listen to the protesters and to reform the 'lese majeste' laws that ban criticism of the monarchy.

Student protests to demand the resignation of Prayuth's government and a new constitution now happen almost daily. While some placards have made veiled criticism of the monarchy, this is the first time it has been open.

Police officer Surapong Thammapitak said: "We cannot yet determine what offences have been committed ... Any offences under any laws will be processed for the investigators."

Prayuth said in a speech in June that there have been no prosecutions under the 'lese majeste' laws recently, at the king's request, but warned against criticising the monarchy.

Criticism was exceedingly rare under the king's father, King Bhumibol Adulyadej, whose 70 year reign ended with his death in 2016.

"Such open criticism of Thailand's monarch by non-elites at a public place within Thailand - with the police simply standing by - is the first of its kind in Thai history," said Paul Chambers, who teaches international affairs at Thailand's Naresuan University.